SINGAPORE: Many banks still do not have enough teeth to tackle fraud, which costs Asia around US$1bil (RM3bil) a year, but social media could be a game changer due to the reputational risk, said a top official from business software firm Progress Software Corp.

The costs of fraud include direct monetary loss, fines from regulators and lost potential customers.

“Fraud is a billion-dollar problem in Asia,” Nelson said, noting the financial and telecommunications sectors are the most targeted. “Much of the fraud that happened went unreported and perhaps some of it is seen as an acceptable loss.”

South-East Asia’s largest bank DBS Group Holdings was recently hit by unauthorised withdrawals of money from accounts through the use of ATM or debit cards.

If something happens and many customers are affected, Nelson said, social media can amplify the issue.

“Even if banks are prepared to take the financial loss, the loss to their reputation is far greater,” Nelson said.

Progress Software, which has a market value of around US$1.5bil (RM4.5bil), develops a range of software with applications such as fraud detection and process management.

Nelson said “market abuse” — such as the manipulation of share prices, often through advanced technology — is increasingly becoming a concern for regulators.

“You need a Ferrari to catch a Ferrari and, at the moment, too often the exchanges and regulators have got a bicycle,” he said. “They need better real-time technology to be able to catch up with the traders who are many years ahead.”

But the 2008 financial crisis has empowered many regulators as more governments realised the need for greater oversight of the financial markets, Nelson said.

Around 90% of Progress Software’s revenue comes from the United States and Europe, with the rest from Asia.

But Nelson said double-digit annual sales growth in Asia, driven by markets such as China, India and Southeast Asia, is possible in the next five years.

“The United States seems to be recovering a little bit, while Europe is still in the doldrums,” Nelson said. “Asia from a GDP perspective is growing more quickly and there’s also a lot of untapped potential for us.” — Reuters

Hope in the new and young 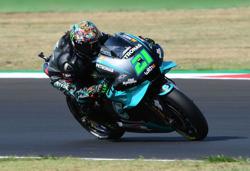