SAN FRANCISCO: A certain feeling is back in this city. Murmurings of stock market riches. Twenty-something entrepreneurs as celebrities. Lamborghinis parked next to taco trucks.

Driven by social media and mobile startups, the money is flowing in the city’s tech industry again, a decade after the dotcom boom minted overnight millionaires and its crash fuelled a local recession worse than anything San Francisco has seen in the latest downturn.

A recent tax break for Twitter and other proposals show city officials are hopeful that this latest tech industry prosperity does not portend another bubble and another bust.

“It seems to be the industry that’s leading us out of the recession at the moment,” said Ted Egan, the city’s chief economist. Even so, he said, “it’s certainly not yet another dotcom boom.”

At present, the signs do not point clearly to the same excess of optimism that led to the high perch from which the city had so far to fall. But some of the numbers swirling around the tech startup scene could stir a sense of deja vu.

Along with Twitter, the San Francisco startup causing the most excitement is Zynga, maker of popular Facebook games like FarmVille and CityVille. Estimates based on recent investments put the valuations of both companies at US$7bil (RM22bil) or more.

Yet unlike the first dotcom era, when companies with neither customers nor a clear way to make money raised millions in public stock offerings, both Twitter and Zynga have become major participants in the online economy.

While Twitter is still tweaking its business model and keeps its revenue figures closely held, the company happily claims 175 million users on its way to becoming a global phenomenon.

Zynga’s popularity and approach to money-making are even clearer: It sells virtual goods that players use in the company’s online games. Last year, the company made about US$400mil (RM1.28bil) doing just that, according to published reports.

“It seems like they’re doing things that people want rather than what they think they want,” said market researcher Colin Yasukochi of today’s startups versus those a decade ago.

In a study for his employer, commercial real estate firm Jones Lange LaSalle, Yasukochi found that the number of tech jobs in San Francisco is nearing the peak set in 2000, the height of the dotcom boom.

Yet the 32,000 tech workers today are occupying about half the commercial real estate space as their 34,000 counterparts before the crash — a possible sign that the estimated 500 tech companies in the city are taking a more conservative approach.

Castles in the air

During the first dotcom boom, technology companies were committing to large spaces with the intent of filling them with employees well ahead of their needs, Yasukochi said.

“Obviously that growth never materialised,” he said. “That had dire consequences.”

Those consequences included an office vacancy rate that shot from less than 5% to 25% in two years.

Accompanied by the crushing blow of the 9/11 attacks on the city’s tourism economy and housing prices that kept rising despite major job losses, the dotcom crash hit San Francisco harder overall than the recent recession, Egan said.

As a result, San Franciscans have reason to fear the bursting of another bubble even as they enjoy the fruits of the tech industry’s current good fortune.

The hope is that companies, investors and the city itself have learned enough from past mistakes to avoid irrational exuberance.

The possible signs of a different attitude include a much lower rate of venture capital investment. The greater Silicon Valley saw more than US$8.5bil (RM27bil at today’s exchange rate) poured into the software industry during the year 2000 alone, according to Thomson Reuters data.

In 2010, the amount was less than US$2bil (RM6.4bil). Startups are still raising money, but running lean has become fashionable.

Last year, Kevin Systrom, 27, co-founded a company that follows the typical lean San Francisco startup model, though with atypical success. The mobile photo sharing service Instagram launched in October. Since then, he says the service has grown to about 3 million registered users, or an average of a half-million new users each month.

Right now the company has four workers — as Systrom puts it, one non-technical person and one engineer for every million users. Despite raising US$7mil (RM22mil) from investors, he says the company has no plans to go on a hiring spree or seek to cash in on a quick public stock offering, the stereotypical scenario during the first Internet boom.

“It’s about going after the best people in the world who want to build a world-class company,” Systrom said. “We are pretty sold at staying lean for quite a while.”

Instagram got its start at Dogpatch Labs, a San Francisco workspace where as many as 25 small startups at a time occupy desks for a few months while they try to get consumers and investors interested in their ideas.

Ryan Spoon, 30, oversees Dogpatch Labs for Polaris Venture Partners, a venture capital investment firm. During the first dotcom wave, he founded a company in his dorm room at Duke University to connect high school athletes with college coaches. The website, berecruited.com, is still around today, unlike many others that started at the time.

Spoon says that a big difference between those early days and now is the speed with which social networks can give startups feedback on whether they have a good idea or not. Investors see that feedback, too, meaning they’ll have a better sense before they pour money into a company whether it has a chance.

“It’s easier faster and cheaper to start and pursue an idea than it’s ever been,” Spoon said. “It’s a fun time.” — AP 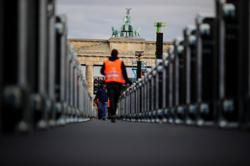