SEATTLE: Worldwide personal computer shipments increased more than 20% in the first three months of 2010 from the same period a year ago, a sign the PC business is on firmer ground after one of its shakiest stretches ever.

Analysts at research firms IDC and Gartner Inc said the quarterly increase was higher than expected, and was driven by spending by both consumers and businesses.

That could indicate that many kinds of technology companies, not just ones that sell PCs, will report stronger-than-expected first-quarter results as Intel Corp did yesterday.

Consumers’ interest in low-cost laptops helped prop up the PC industry for the last three quarters. That remained true in the first quarter, a time when PC sales are typically slower. Consumers also started buying more of the slim “all-in-one” desktop computers that build everything into the monitor, IDC said.

In China, consumers flocked to deals offered around the Chinese New Year holidays, which helped push up PC shipments 45.4% in the country, according to Gartner.

The analysts also said businesses in the United States and Western Europe are starting to purchase new computers for the first time since the economic downturn.

Mikako Kitagawa, an analyst at Gartner, said businesses spent more freely as the overall economy improved. She also said Windows 7, Microsoft Corp’s newest PC operating system, will push companies to replace computers faster in the second half of this year and the beginning of 2011.

The quarter looked particularly strong compared with a year ago, when PC shipments sank about 7%. The holiday period of 2008 and the first half of 2009 marked the industry’s worst stretch in several years.

But then consumers’ interest in netbooks — small, inexpensive, low-powered laptops — and other cheap portable computers helped drive a turnaround, beginning with a tiny increase in shipments during the third quarter of 2009.

Acer’s shipments grew faster than HP’s or Dell’s in the quarter. Analysts from both groups said HP and Dell have had a hard time matching Acer’s low prices.

For the full year, IDC predicts PC shipments will climb 15% compared with 2009. Gartner did not issue a forecast. — AP 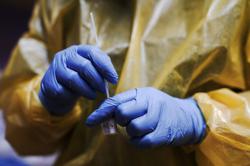