Companies work with the Lisa app to offer beauty and spa-like services to employees, and Lisa brings clients to its cosmetologists. (Lisa app)

When Lisa Nation and her husband, Robert Richmond, founded the Lisa app in Chicago in 2016, they envisioned consumers would use it to book spa and grooming services on demand.

What Nation discovered was a mismatch in supply and demand. Consumers were excited about using the app, but it was difficult to get the "artists" – Nation's term for the cosmetologists, massage therapists and other grooming service providers on the platform – to adopt the technology, she said.

The solution: a pivot from servicing consumers to servicing businesses. Companies now work with Lisa to offer beauty and spa-like services to employees, and Lisa brings clients to its cosmetologists.

"First we had a lot of supply and not demand because we were so new, and then we started having demand and not the supply ... there were a lot of moving parts," Nation said. "With B2B, we can control the experience to make everyone on board happy."

In an effort to retain workers, companies are getting creative with employee perks. Since Lisa pivoted to business-to-business in January, the Lisa app has quietly lined up more than 20 corporate clients, including Grubhub, @Properties, CBRE and Industrious.

The startup creates marketing materials for the corporate clients and brings in cosmetologists into the office to perform service for about a four-hour period, Nation said. Some companies will bring in Lisa's service providers once a year, while firms like Echo Logistics will bring Lisa artists in every two weeks.

Nation says Lisa takes a "small piece" of what companies pay, though she wouldn't specify an exact number. When Lisa works directly with consumers, she said it takes a small percentage, "similar to Uber and Airbnb," but also would not specify the exact take.

In early 2016, Grubhub began bringing in the Lisa app's artists to provide massages, manicures and facials. Now, the company brings in Lisa artists several times a year, said Kelley Berlin, Grubhub's senior vice president of people. The company decided to bring in Lisa's services last year as a "fun way to engage and reward employees," she said in an email.

"We're always looking for new ways to motivate employees, so it made sense to bring Lisa's on-demand relaxation services to the Grubhub office," Berlin wrote. "We find the service to be a great partner."

Grubhub said Lisa's services are offered as a free perk to Grubhub employees, but declined to say how much it pays Lisa.

In addition to strengthening its local business-to-business clientele, Nation said the firm is eyeing a national expansion. The startup recently struck a deal with corporate fitness firm LifeStart; using Lisa's software to build their own, similar app called Hubbub, LifeStart will offer Lisa's spa and grooming services to their employees. LifeStart will launch Hubbub in Chicago, Los Angeles, Dallas and Phoenix as early as November 2017, LifeStart CEO Mike Flanagan said in an email, adding the company is also planning to roll out the app in Boston and Portland, Ore.

Lisa may face competition from similar firms like GlamSquad and The Red Door. While GlamSquad offers wedding packages and hair, nail and makeup services, The Red Door offers manicures, pedicures, hair styling and massages. In New York and Chicago, The Red Door provides on-site services and discounts to corporate employees.

Lisa currently has five full-time employees. Nation says they have about 3,000 artists on the platform; she said "hundreds" are active, though she wouldn't specify an exact number. She would not disclose the company's revenue.

"It's been a struggle. And then all of a sudden we were down in the trenches, getting scrappy, climbing and clawing our way to the top," Nation said. "I feel like we've popped up for a breath of fresh air with all this momentum going on in these partnerships finally coming to fruition." — Chicago Tribune/Tribune News Service 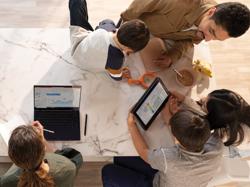