Tower of Guns is a fast-paced stripped-down shooter while Out There is a slow, melancholic space adventure. They’re basically the zany odd couple of today’s back-to-back game reviews.

Let’s take a look at two games today: One’s full of action but lacks any thought, while the other gives you plenty to think about but lacks any sort of action whatsoever.That’s right, it’s indie game review time with Tower of Guns and Out There!

Here’s our review of Tower of Guns: Bang bang, pew pew, kaboom! 2.5 stars. That is all, thank you. Hang on, our editor is telling us that we need to elaborate if we went to get paid. That’s tough, because there isn’t much to say about Tower of Guns except that it’s a very, very stripped down first-person shooter. And not exactly in a sexy way either. WELCOME TO THE TOWER: As you enter the tower, you get to pick one gun and one perk to determine your playstyle.

In Tower of Guns, you’re given a gun and tasked with shooting your way through randomised levels full of bullet-spewing mega cannons, bouncing bombs and swarms of explosive drones who unfortunately want to get terminally cuddly with you.

The game is basically a fast, twitch-based skill challenge — the enemies simulate a bullet hell environment and you’ll want to complete the game as quickly as you can and with as little damage as possible. Some levels have a par time of under four minutes, so you can tell that this is a game you can play during your lunch break.

At first the idea of a fast-paced, pick-up-and-play shooter sounded amazingly compelling. Who doesn’t want to spend a few minutes a day going pew! pew! pew! before getting back to work, right? The game certainly fulfils our expectations of excitement, but here’s the thing: It’s not really engaging. Tower of Guns doesn’t have anything like that — it’s such a barebones you-have-a-gun-so-you-shoot-things premise that you forget why you’re playing to begin with. There’s no story to hold your attention, and the robotic enemies aren’t satisfying to kill. Many are just stationary turrets that you can just ignore if you’re fast enough. FORGING LEVELS: Each randomised level has a different theme, so you'll enjoy a fair amount of variety in your playthroughs.

Even if we wanted to view it as just a bullet hell challenge, it doesn’t work because the first-person view makes it impossible to fully understand the bullet patterns exploding around us. Ultimately, this led us to play Tower of Guns by constantly making bee lines towards the exit doors, engaging only the enemies that got in our way and taking only the powerups that happened to be near our quick exit route. That’s the best way to play it... we guess?

To be fair, there are some things we like about Tower of Guns. We like how you could unlock new guns and perks by completing certain achievements. (Tip: Finish any level under the par time to get the first gun that’s worth a damn.) We like how enemies dropped weapon power ups while damage reduces the power of your weapon; it’s a nice system that promotes aggressive play and defensive skills simultaneously. 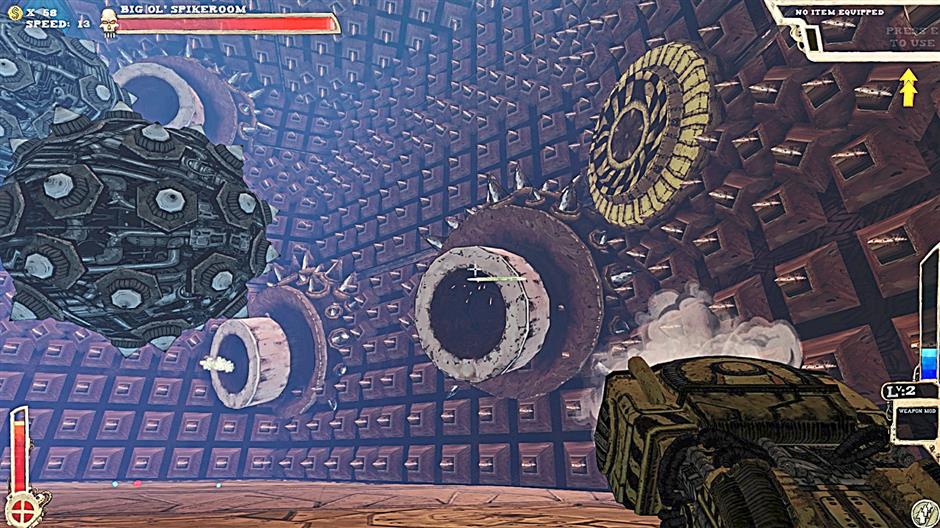 OH BALLS: Gigantic spiky balls become a little less threatening once you realise they follow the physics of styrofoam balls.

Tower of Guns is pretty exciting, but it’s not exactly engaging. It’s worth a purchase if you enjoy FPS games and want to try something different, but we can’t recommend it for anything other than that.

Out There takes you to the place that’s the most out there possible — spaaace! You’re an astronaut who wakes up to find his ship somehow stranded in an unknown part of the galaxy. Like Star Trek: Voyager (but minus a crew of quirky individuals), your goal now is to find a way back to Earth and, hopefully, to unravel the mystery of how you ended up lost in space to begin with.

The game bears a surface resemblance to roguelikes, in the sense that the map is randomised for each playthrough and you’re expected to die a lot. You start off with a dinky lil’ spaceship with only the most basic of equipment, and as you jump between star systems on your journey home, you’ll need to ­manage three important resources: Fuel, oxygen and hull strength. BAH-WEEP-GRAGNAH: It's hard to understand what aliens are saying at first, but eventually you'll build up a working vocabulary of nonsense. (* this isn't entirely nonsense; it's part of the Universal Greeting from Transformers.)

Out There plays a lot like a “choose your own adventure” game, but with one distinction: There’s no combat. Oh, you’ll encounter dangerous situations, mysterious technologies and alien civilisations, but these challenges are resolved through the dialogue of... multiple-choice dialogue boxes.

“You meet an alien traveller. Do you (A) flee, (B) offer it Omega particles, or (C) shake its hand?” The method of interaction might sound a bit boring, but that doesn’t mean the choices you make aren’t engaging. Death in this game doesn’t come in the form of explosive space battles with laser blasts whizzing past in a climatic last stand. 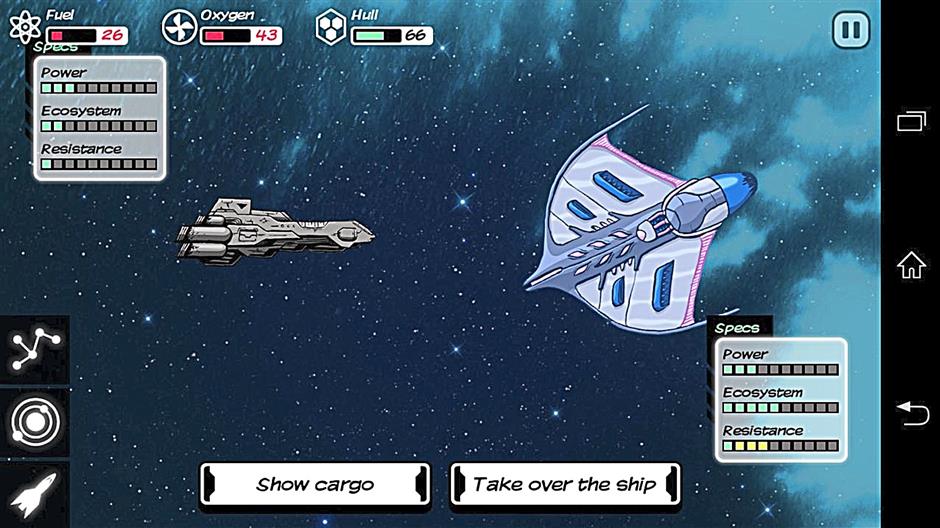 BEAM ME UP: If you're lucky, you'll encounter abandoned space ships that you can commandeer.

No, in Out There, death comes as a slow realisation that you’re running out fuel and oxygen as you prepare to make a risky, but unavoidable, jump into a new star system, which may or may not provide you with the resources you desperately need.

Calling a game “a boringly engaging exercise in desperation” might seem like a very odd way to recommend a game, but honestly, that’s a positive thing. The actual problems of Out There, on the other hand, are two completely different things.

The first problem isn’t even the game’s fault, and is in fact another game called FTL: Faster Than Light. If you ask us “can you recommend a space adventure game where you have to balance survival with exploration?” then we’d immediately reply with FTL, not Out There. 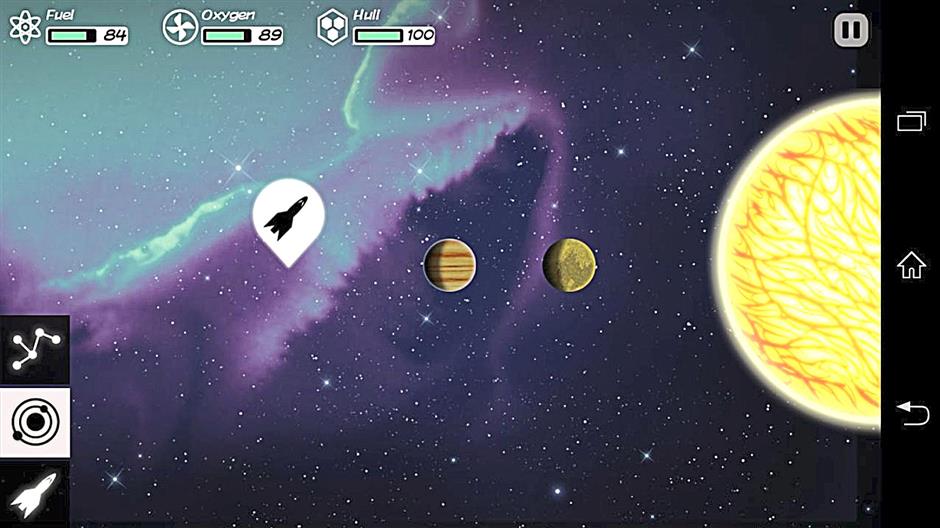 PLANETARY: The three basic planets you'll see are gas giants, rocky planets and garden planets, although there are plenty of surprises beyond those.

Sorry, but as much as we enjoyed the melancholic atmosphere of Out There, FTL provides too much competition because it combines the desperate survival aspects with intensely exciting space battles. On the other hand, FTL is for the PC while Out There’s for your mobile, so there’s no reason you can’t have both.

The second problem is one to do with gameplay balance. In FTL, you’re faced with difficult decisions — do you take missiles or drones? Do you focus points in shields or engines? Each choice drastically changes the way you play, and it’s impossible to know in advance which one is “right.” This leads to tense decision-making moments.

With Out There, which is entirely about decision-making, you’ll quickly realise that there’s a single very optimum way of playing the game: Have one stack of oxygen in your inventory, one stack of iron for hull repairs, then fill everything else with fuel, fuel and more fuel. 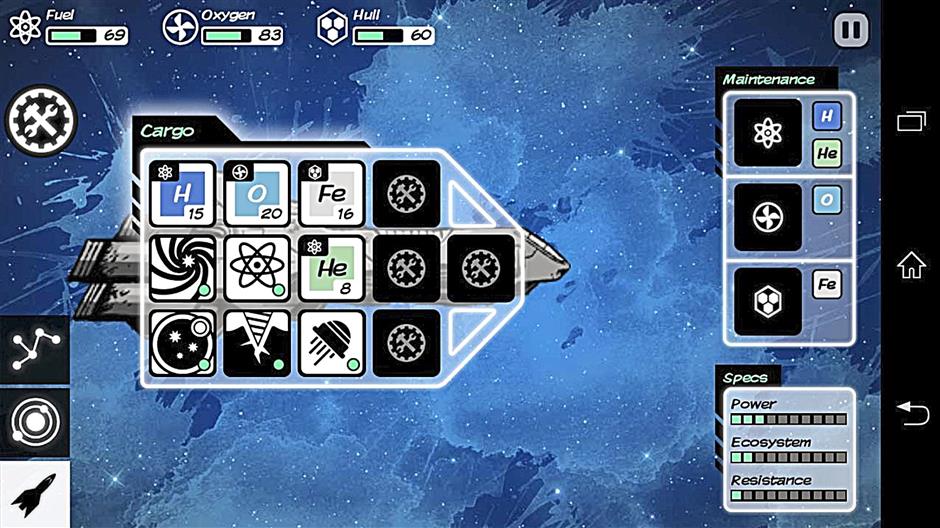 NEED MORE FUEL: Much of the game is inventory management, and the best management is to fill your inventory with fuel.

Sure, you might feel like you’re flying around in the USS GonnaBlowUp, but you’ll need that fuel for absolutely everything. Heck, you need fuel just to gather more fuel, making the resource indispensable. After becoming a fuel hoarder, there aren’t many hard decisions left in the game, so often it’s just you versus the Random Number Generator throwing random obstacles in your way.

Even though we’ve died multiple times in our playthroughs of Out There, we really wished this game threw more challenges at us. As it stands, we really enjoyed having this on our Sony Xperia ZR, but we can see in this game the potential to be so much more.

In contrast to Tower of Guns, Out There is a game that’s very engaging but not at all exciting. It’s a boringly engaging exercise in desperation, and no, really, that’s a recommendation.

So there you go — guns and spaceships. Whether you really like action or really prefer to avoid it, there’s a game for you to try this week.

Just don’t try to combine both at the same time; the startlingly different dispositions of the games will give you mental whiplash and, besides, carrying a firearm on the USS GonnaBlowUp is just a terrible idea.