Set in a retro-futuristic world with cyberpunk undertones, Jazzpunk is a fascinating blend of nonsense and creative design. We still can’t decide if we should recommend it or not.

WE hope you have some aspirin to spare, because right now we have two things: a review of Jazzpunk — a first-person “adventure” set in a retro-­futuristic cold war era — and a migraine from hell. The two may be related.

This isn’t to say that Jazzpunk is a ­terrible game; in fact, we found it fascinating. It ­combines an amazing setting and an equally well-designed art style with a never-ending stream on maddening, nigh-nonsensical jokes.

Warning: this review will contain ­spoilers of the first two levels, starting from... now, because it’s impossible otherwise to give ­context as to why we’d give a sushi-­eating cowboy explosive diarrhea so we could ­collect his cyber-kidney.

Here’s the setting: Jazzpunk takes place in a world where Cold War-era spy ­shenanigans exist side-by-side with Neuromancer-styled cyberpunk themes. There are robot geisha wandering the city, the pervasive ­presence of the Japanese language indicates the culture’s dominance in this world, and the vehicles that fill the psychedelically-­coloured streets are reminiscent of those from 1960’s Thunderbirds.

This sounds like an amazing world to explore, and to an extent it is. Unfortunately, the plot that drives the narrative boils down to simply this: you are a secret agent, and then jokes randomly happen. 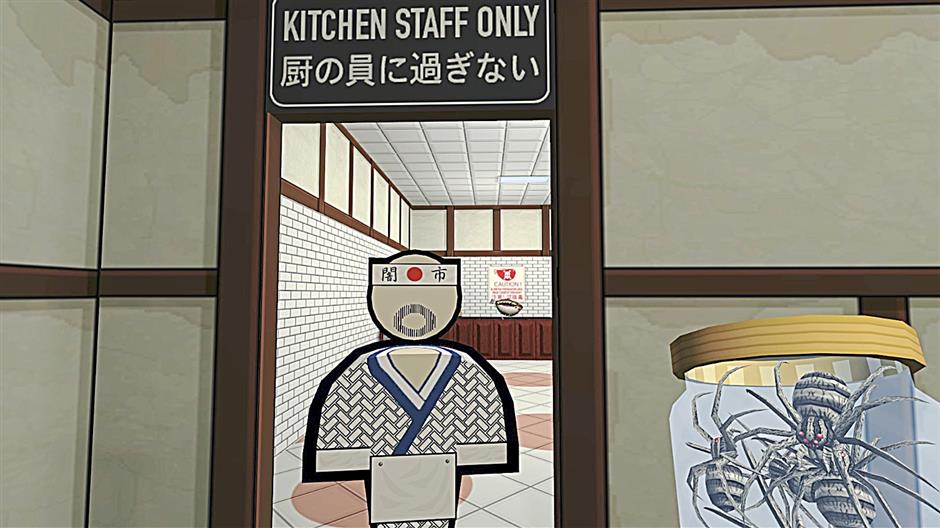 SPIDERS IN A JAR: Unless his name is Peter Parker-san, this won't end well for the sushi chef.

Take, for example, the second mission of the game where you’re assigned to trail a cowboy to a sushi restaurant and then somehow extract his cyber-kidney. OK, this sounds like an interesting espionage wetwork operation, and the steps leading to your goal play out like a good, albeit short, puzzle adventure. The puzzle relies on some very twisted logic to solve (throw exactly five spiders on the sushi chef then poison the sushi with blowfish) but that’s quite forgivable.

Our problem is that on the way to the objective, while we were exploring this fascinating espionage-filled/cyberpunk-themed world, we encountered a number of non sequitur ­distractions.

Once, we entered a room and were suddenly tasked with swatting flies in a room full of precious vases while Looney Tunes music played in the background. Except we weren’t ­supposed to swat the flies, we were supposed to break the vases. Why? No reason. Later, we found a digital pizza that sucked us into a pizza-themed horror world, before spitting us back out again. Why? We don’t know, this happened apropos of nothing, and neither event affected the story in any way.

Here’s where Jazzpunk falls apart for us: the main bulk of the game involves this sort of non sequitur humour, and we didn’t “get” the jokes. 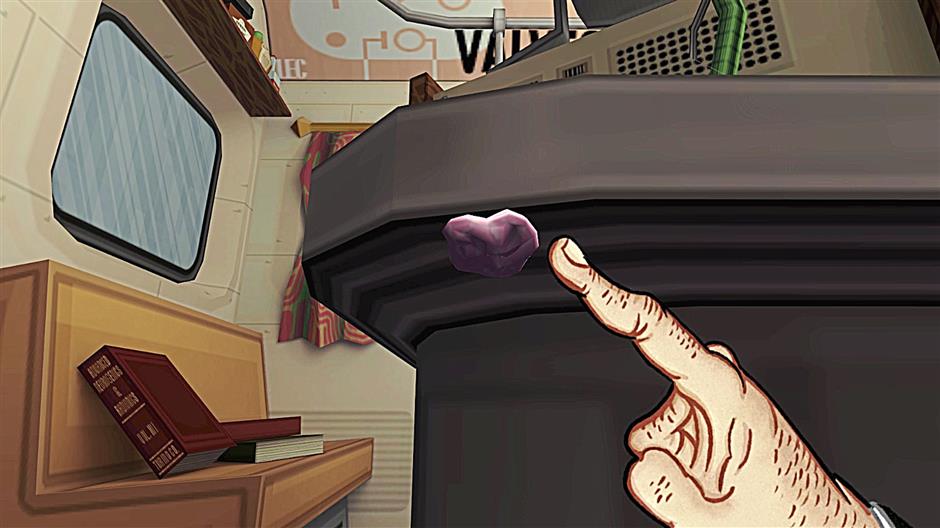 FUNNY?: The jokes are pretty random and come from nowhere. Like finding a whoopee cushion or some gum, apropos of nothing.

Please allow us to indulge in a little ramble on the subject of comedy so we can better explain our issue with Jazzpunk.

See, we love crazy comedy films like Spaceballs (1987), The Naked Gun series (1988-1994) and the absolutely off-the-wall Kung Pow! Enter the Fist (2002). These comedies are zany and madcap, so we thought the craziness of Jazzpunk would be right up our alley.

However, there is a big difference between these comedies and Jazzpunk. In these movies, the jokes are in service of the actual story. Like in Spaceballs, where starships go to “ludicrous speed” because they’re making fun of Star Wars’ “light speed”. Or in Kung Pow, where an epic kung fu fight ends up hilarious because you’d never expect the enemy to be a cow.

In Jazzpunk, the absurdist comedy exists solely for the sake of existing. There are a lot of “hilarious” jokes and pop culture references hidden throughout the colourful world, but they exist in a vacuum. They neither enrich the setting nor complement the story, such as in the first mission where you could randomly enter a cinema and purposely annoy the other movie-goers.

See, annoying people who are trying to enjoy a movie is funny. That’s the joke, get it?

If you like this sort of thing, that’s fantastic. But if you need some context to appreciate comedy, then you’ll end up with a massive headache trying to make sense of everything. 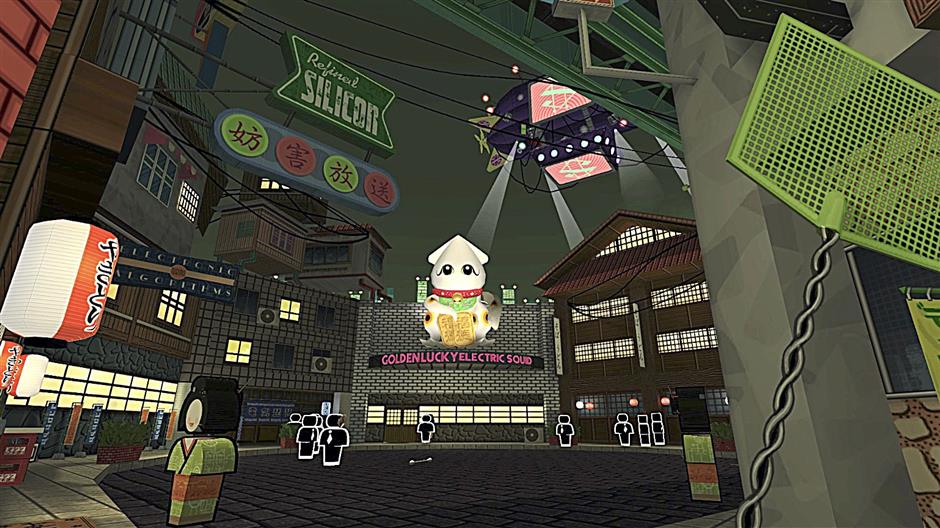 CYBER-JAPAN: We really liked how the retro-futuristic Japanese culture is a big part of this world.

All right, we’re being pretty hard on the humour of the game, but that doesn’t mean we think Jazzpunk is terrible. As we said, we found it fascinating, and one of its greatest strength is its visual design. It’s as if the talent of the visual designer grew proportionately with the insanity of the scenario writer.

The game has a very distinct visual style — thick lines, big texts, bold colours and high contrasts — which complements the world’s retro aesthetics. And sure, the characters look like they’re pieces of a board game, but they still manage to be very expressive. The world looks like a cartoon, but it was still a world we wanted to immerse ourselves in.

Additionally, we loved how they used visual cues to explain game mechanics, like drawing dashed lines to draw attention to where the player’s supposed to look. (Pay attention to when the Director hands you spy ­missions.) It’s simple, effective, and ­reinforces the cartoon feeling. We just really, really, ­really wished we didn’t have to suffer through random acts of comedy just so we could continue exploring this world.

Jazzpunk has such great creative design we can’t help but admire it. However, the absurdist humour of the game made us more confused than entertained. Ultimately, there’s a very easy way to figure out if Jazzpunk’s humour is suitable for you. Just answer these two questions:

First, do you like your jokes to make sense? If you answered “yes”, then we’d recommend avoiding Jazzpunk.

Second, do robot geishas dream of electr- hey look a monkey doing the Melbourne Shuffle! If you answered “I’ll have a ­cheeseburger with a side of ethernet”, then yeah, Jazzpunk’s insanity may be just the thing for you. Just remember to take your medication before you start playing.