GTA V: Seedy side of a sunny state

MASSIVE FIREPOWER: Be prepared for a dosage of lead normally reserved for world wars in GTA V.

With a huge open-world to explore, three playable characters and a wealth of side activities, GTA V is the gift that keeps on giving.

SEEN through the lens of Rockstar Games’ sardonic wit, Southern California is a kaleidoscope of American culture. Populated with self-important hedonists and self-improvement gurus, the luxuriously wealthy and startlingly poor, vanity plate liberals and border-patrolling conservatives, the region captures an impressive number of American idiosyncrasies.

Californian essayist Joan Didion perhaps described it best as “a place in which a boom mentality and a sense of Chekhovian loss meet in uneasy suspension.” That suspension serves as the perfect backdrop for the three anti-heroes of Grand Theft Auto V.

Retired bank robber Michael drinks his days away secluded from his dysfunctional family, reminiscing about his glory days by watching old action flicks in his luxurious estate. On the other side of the tracks, young hustler Franklin scrapes by, repossessing cars while looking to escape his dead-end neighbourhood. The third miscreant, Trevor, is most at home drinking and fighting in the trailer park outskirts. With the loquaciousness of Justified’s Boyd Crowder and the volatility of Trainspotting’s Begbie, this maniac acts implicitly off impulse, often to hilarious and destructive results.

After events join these disparate personalities in an uneasy alliance, the three navigate the criminal underbelly of Los Santos, performing unsavoury tasks for corrupt officials, Mexican cartel leaders, white collar swindlers, and, most importantly, themselves. When they aren’t bickering, the trio pulls off increasingly daring heists. 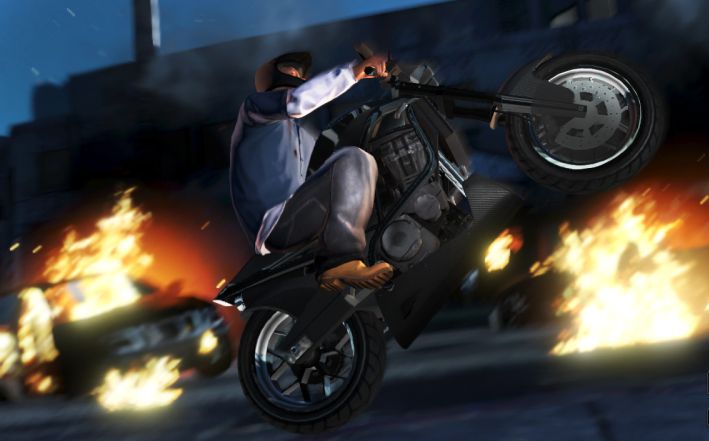 HELL ON WHEELS: GTA V offers you a thrilling ride with diversity of missions.

Open-world games are often weighed down by “errand boy syndrome,” tasking players with menial jobs that seem beneath the ability of the protagonists or outside the cause of the narrative.

While GTA V still has its share of blue-collar work (like towing cars for Franklin’s friend), the majority of the tasks feel more important because you can often see the direct benefit.

For example, running weapons across Los Santos may increase the amount of money the airfield you purchased generates. This also applies to the heists serving as the game’s centerpiece. Before you can rob the jewellery store, you must case the joint to identify vulnerability, hijack a pest control van that provides your crew with cover, buy some masks to conceal your identities, steal a gas canister to deploy through the vents, and procure getaway vehicles. I didn’t mind running these errands because I knew the payoff potential.

Before attempting the big-time heists, you are given the choice of two approaches. The first typically involves an Ocean’s 11 degree of cunning, stealth and deception, while the alternative frequently involves a dosage of lead normally reserved for world wars. Before you act, you also must pick your crew; hiring a cheap, young hacker may cost you valuable time to acquire the jewellery, but if you pick the experienced guy he demands a bigger cut.

Once the heists begin, the signature innovation driving GTA V takes centre stage. During these missions you can instantly switch between each of the three characters.

Rockstar often uses this mechanic to avoid the hassle of relocating to meet another wave of enemies, imploring you to switch via a blinking icon and noticeable sound effect to keep you in the thick of the action. The transitions occur smoothly, and the speed at which you swap characters is impressive.

The diversity of the heists and other missions is also worth praising. During my time in Los Santos, I scuba dived into a scientific research centre to steal a chemical weapon, infiltrated a burning government agency building posing as a firefighter to steal a hard drive, and fought though a five-star wanted level with military grade weapons.

Should you falter during these high-octane scenarios, the forgiving checkpoint system (a much needed improvement over GTA IV) preserves your forward progress rather than forcing you to start missions from scratch.

The three characters has distinct lives outside of these jobs, which includes separate friends, properties, bank accounts, and problems. Taking this approach allowed Rockstar to craft unique content for each, which keeps the side missions fresh.

You can alternate between the perspectives of Michael, Franklin, or Trevor at will, and Rockstar uses this as an opportunity to surface unique gameplay opportunities.

Jump to Trevor and you may find him passed out drunk on a hill nearby a hunting mission. Switch back to Michael later and he may be playing tennis with his wife or heading to an appointment with his psychiatrist.

Giving the player so much insight into the inner workings of the three protagonists provides great mission diversity, but it also creates the biggest crack in the story.

Given what we have witnessed from one particular main character, his reaction to one of the major plot reveals seems extremely out of line with his personality. This happens early on and hangs like an albatross around the neck of the narrative for the majority of the game. The choose your own adventure ending (you have three options) also fails to deliver on the tension promised by this setup.

While the plot doesn’t live up to the high standards set by Red Dead Redemption and GTA IV, the design surpasses every previous Rockstar game.

GTA V melds together the expansive open world of its Western, the vehicle control and customisation of Midnight Club: Los Angeles, the shooting mechanics of Max Payne 3 and Rockstar’s signature sense of humour to create its most well rounded game to date.

The critical mission path offers roughly 25 hours of gameplay, but you can spend an even greater amount of time exploring the vast open-world.

Whether you are in downtown Los Santos or the sprawling San Andreas countryside, you always have a diverse array of activities at your disposal. While in town you can shop for new clothing, get a tattoo, catch a flick at the movie theatre, or base jump off skyscrapers. 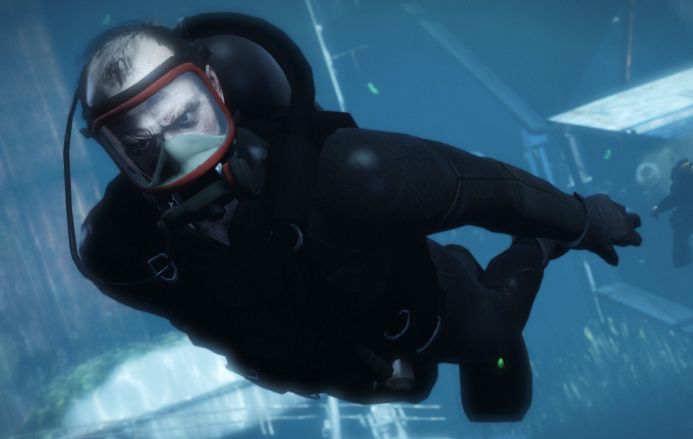 GO FOR A DIVE: You can search underwater shipwrecks for lost treasure off the coast of Los Santos.

Outside the city limits, you can search underwater shipwrecks for lost treasure off the coast of Los Santos, hunt animals in the wilderness, play darts in a dive bar, or participate in one of the many race varieties.

GTA V has the lofty expectations of living up to the pedigree of its critically acclaimed predecessors. Rockstar Games deserves credit for pushing the boundaries of its flagship franchise yet again with improved controls, great mission variety, and the most jam-packed open world I’ve ever visited.

The narrative fails to match the impact John Marston or Niko Bellic’s tales, but the colourful characters kept me interested in the story nonetheless. Like the golden state it parodies, Grand Theft Auto V is filled with beautiful scenery, a wealth of activities and the promise of fortune. — Game Informer Magazine/McClatchy-Tribune Information Services