Up to seven out of 10 people who experience flu-related complications are over the age of 65, with up to 85% of flu-related deaths occurring within this age group.

BEING a diabetic is a hassle in its own right. Now, add catching a flu to the equation and you get a recipe for discomfort.

That’s because, for diabetes patients, “catching a cold” isn’t as simple as it may seem.

Flu – also known as influenza – is capable of causing diabetics multiple complications and can make it difficult to manage fluctuations in blood glucose levels.

Not only do diabetics face a higher risk of developing complications, such as eye damage and kidney failure, but they also have a flu-related death ratio that is three times higher than normal, as severe sickness can weaken their already debilitated immune systems.

And with one in five adults in Malaysia affected by diabetes, it’s understandable that we should be well-versed on the disease and how flu can threaten the health of diabetics.

In Malaysia, where flu is present all year round (thanks to our climate) and flu vaccination rates are very low, millions are vulnerable to its effects.

That number will only continue to grow, as the prevalence of diabetes has steadily increased in the country from 11.2% in 2011 to 18.3% in 2019. And if that wasn’t worrying enough, the figure is projected to reach 31.3% in the space of three years, affecting approximately seven million people in our country.

These statistics are further compounded by our country’s growing ageing population, as those over the age of 65 are especially vulnerable to the effects of flu, with up to seven out of 10 experiencing flu-related complications and up to 85% of flu-related deaths occurring within this age group.

Other high-risk groups that are more likely to experience flu-related complications include pregnant women, children aged six months and above, individuals with chronic medical conditions and healthcare workers.

To educate and increase awareness about vaccination as an effective way to protect yourself against the flu, Immunise4Life (IFL) is reinvigorating the 'Flu Prevention is an Act of Love' campaign, which provides educational resources such as articles, interviews and videos for the public.

IFL is an expert-driven community education initiative, which was established to promote immunisation for people of all ages against vaccine-preventable diseases and to address issues pertaining vaccine hesitancy and refusal.

The 'Flu Prevention is an Act of Love' campaign, which was first launched in 2019, now has the new theme of ‘Preventing the Flu at 65 & Beyond, I Get It Done’, in recognition of the significantly increased risk faced by older individuals and the growing ageing population in the country.

IFL was launched in 2013 in a collaborative effort by the Health Ministry (MOH), Malaysian Paediatric Association and Malaysian Society of Infectious Diseases & Chemotherapy.

In support of healthy ageing, the campaign also calls upon Malaysia’s ageing population to be well-informed and proactive in preserving their health, independence and quality of life. This can be done by practising a healthy lifestyle based upon the ‘Seven Keys to Happy & Healthy Ageing’ endorsed by MOH.

These steps include eating a healthy diet, staying physically active, getting adequate rest and sleep, going for regular health check-ups, learning new skills and socialising with loved ones.

The most important step, however, is to get the flu vaccination to reduce the risk for flu-related complications, hospitalisation and death.

To learn more about the 'Flu Prevention is an Act of Love' campaign, visit www.actoflove.ifl.my 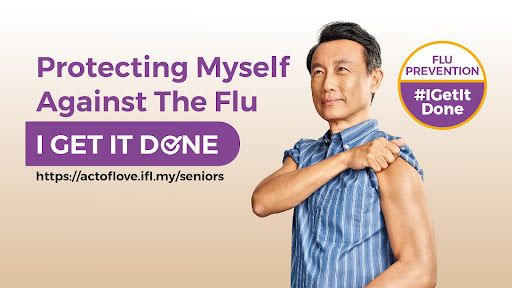 The 'Flu Prevention is an Act of Love' campaign now has the theme of ‘Preventing the Flu at 65 & Beyond, I Get It Done’, in recognition of the increased risk faced by older individuals and the growing ageing population. 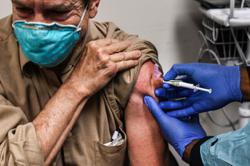