The Japan Sumo Association had yet to accept his letter of retirement but would discuss the matter at a board meeting on Thursday, Kyodo reported.

The JSA has yet to respond to a request for comment from Reuters.

Abi, whose real name is Kosuke Horikiri, pulled out of the tournament after he was found to have visited hostess bars on two occasions -- once before and once during the event, the report said, adding he had tested negative for COVID-19.

The 26-year-old made his professional debut in 2016 and has reached sumo's fourth-highest rank of komusubi.

Terunofuji won the July tournament held at Tokyo's Ryogoku Kokugikan, which has been kept to a quarter capacity because of the virus. It was the first tournament held in four months following the cancellation of May’s event due to the pandemic.

The tournament was also moved from its usual location in Nagoya to reduce necessary travel during the pandemic. 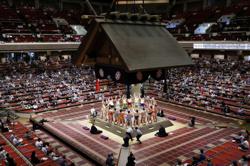 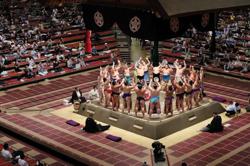