(Reuters) -Twice champions Croatia reached the final four of the Davis Cup Finals for a sixth time with a 2-0 win over hosts Spain in Malaga on Wednesday.

Marin Cilic rallied to clinch the winning point for Croatia with a 5-7 6-3 7-6(5) victory over Pablo Carreno Busta after Borna Coric had earlier given his side the lead with a 6-4 7-6(4) win over Roberto Bautista Agut.

With Carreno Busta up 5-4 in the third set tiebreaker and two points away from forcing a deciding doubles rubber, Cilic fired down an ace to draw level and then coolly went on to seal the win in three hours and 13 minutes.

Croatia, who finished runner-up to Russia in last year's Davis Cup final, will play Australia in semi-final action on Friday in Malaga.

A misfiring Cilic managed to hold serve in the opening game of the match despite four double faults and that inaccuracy at the service line was a sign of things to come for the Croatian, who mixed 20 aces with 15 double faults.

Cilic started to find his groove in the second set where he managed to consolidate a break for a 5-2 lead and then went on to force a decider.

After the two players combined for four service breaks across a six-game span of the third set, Carreno Busta held for a 5-4 lead but Cilic also steadied the ship and managed to push it to a tiebreaker where he quickly fell behind 4-1.

In the day's first match, Coric was solid from the service line as he fired down 12 aces and turned aside the only break point he faced en route to securing the victory in just under two hours.

Coric broke to go 4-3 up in the opening set and after Bautista Agut held to love in the next game it was the Croatian who saved a break point to hold serve and close out the frame.

The two players then combined for five love holds during a tightly-contested second set during which neither faced a break point before Coric raced out to a 4-1 lead in the tiebreak and then secured the win on his third match point. 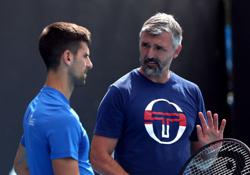