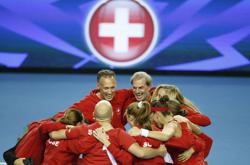 LONDON (Reuters) - World number one Iga Swiatek's decision to skip the Billie Jean King Cup Finals in Glasgow is understandable, according to Billie Jean King, although she wishes the Pole had not been as hasty.

Swiatek blamed scheduling on her decision, with the WTA Finals in Fort Worth ending just one day before the Billie Jean Cup Finals begins across the Atlantic on Nov. 8.

"Personally I think I would have liked Iga to have waited a little longer (to make the decision) because you never know how you're going to do," American great King said in a video call on Monday. "I guess you have to figure out yourself what's important to you, but for me this would be a no brainer."

Swiatek has called on tennis's governing bodies to work on a better schedule, saying the quick turnaround and time zone difference made it impossible for her to play for Poland at the Billie Jean Cup Finals.

But King, herself, suggested that players have it easier than when she was in her prime.

"In our day we were tired all the time playing two things half the time," King said. "I think it's such a privilege to play for your country but I also understand her point of view.

"She's number one. She's played the most matches probably. She's tired already, probably. I was hoping she would just kind of wait see how it's going.

"But I can totally understand her reasoning."

Poland are in a group with the Czech Republic and the U.S.

"I hope the Polish team think, 'okay, Iga's not here, that's a fact, but what are we going to do to win this.'"