(Reuters) -American Jessica Pegula captured her first WTA 1000 crown with a 6-2 6-3 win over Maria Sakkari in the Guadalajara Open final on Sunday.

The third seed, who will be making her first appearance at the season-ending WTA Finals in Texas this month, beat four Grand Slam champions en route to the final, where she needed only 70 minutes to beat Sakkari.

"All the people I beat, my draw to get here in my opinion was honestly the toughest out of everybody," said Pegula, who beat major winners Victoria Azarenka, Sloane Stephens, Bianca Andreescu and Elena Rybakina in the earlier rounds.

"So I was a little annoyed when I saw the draw come out.

"But the way I've been able to manage it throughout the whole week, today handle my nerves and emotions, I'm super proud of myself."

Pegula switched gears at 2-2 and went on to take the opening set. She broke twice to race ahead 5-2 in the next before closing out the win as fourth seed Sakkari struggled with unforced errors.

Pegula converted five out of eight break points against Sakkari, who was playing her second match of the day having earlier wrapped up her rain-delayed semi-final against Marie Bouzkova.

It was Pegula's 41st match victory in WTA main draws this year, with only world number one Iga Swiatek (62) and the second-ranked Ons Jabeur (46) winning more.

She will rise to number three in the rankings.

Earlier on Sunday, Sakkari beat Bouzkova 7-5 6-4 to set up the meeting with Pegula. She had won the first set on Saturday when the match was halted due to rain.

Returning to the court, the Greek looked to make quick work of her Czech opponent, racing out to a 4-l lead, before Bouzkova rallied and swept the next three games to level the set at 4-4.

Sakkari struggled to hold serve at 5-4 before breaking Bouzkova to secure her place in her second WTA 1000 event final of the year.

(Reporting by Steve Keating in Toronto and Shrivathsa Sridhar in Bengaluru; Editing by Clare Fallon/Peter Rutherford) 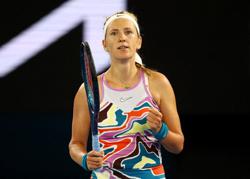