(Reuters) -Pablo Carreno Busta rallied from a set down to defeat Hubert Hurkacz 3-6 6-3 6-3 in Montreal to claim the biggest title of his career at the Canadian Masters on Sunday.

The unseeded Spaniard jumped for joy when he broke the eighth-seeded Pole to seal the win in front of a packed house, hitting peak form that will lift his world ranking to 14 from 23 with the U.S. Open set to start on Aug. 29.

"Please don't wake me up if I'm dreaming because I'm enjoying this a lot," Carreno Busta said during the trophy ceremony.

It was no easy route to the title for Carreno Busta, who also notched wins over current world number 14 Matteo Berrettini and 12th-ranked Jannik Sinner in Montreal.

Hurkacz came out sharp, earning the first service break of the match and maintaining the lead to take the first set.

But Carreno Busta bounced back to take a 3-0 lead in the second that he would not relinquish to set up the winner-take-all third.

The key moment of the decider came when Carreno Busta broke for a 2-1 lead after a Hurkacz drop shot failed to clear the net. Hurkacz responded by bouncing his racket off the court in frustration.

The point of the match came in the sixth game of the third set when Carreno Busta raced to track down a deep lob and hit a desperation shot over his head to extend the point, which he ultimately won with a leaping backhanded volley at the net.

"I don't know how I did this," a smiling Carreno Busta said of the epic exchange.

"I tried to be as fast as I can and put the ball inside the court again ... after that I think it was an incredible point. It's just one point, but it was very, very good for the confidence."

Hurkacz, who was denied in his quest for a second Masters 1000 title, tipped his hat to his opponent.

"He definitely was playing really amazing this week," he said.

"I congratulate him because that's his biggest success so far. He definitely deserved it." 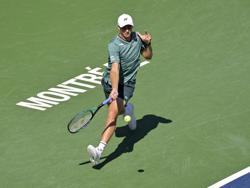