(Reuters) - Nick Kyrgios kept his recent hot streak alive with a 6-4 6-4 win over Sebastian Baez at the Canadian Open on Tuesday to set up a mouthwatering second-round showdown with world number one Daniil Medvedev.

The Australian was far from his best and even suffered a rare break of serve but his booming serve and thunderous forehand ultimately overpowered the Argentine.

Kyrgios has won 13 of his last 14 matches with his only loss coming at the hands of Novak Djokovic in the Wimbledon final in June.

Kyrgios and Medvedev both entered the Masters 1000 tournament in Montreal after notching titles at U.S. Open tune-up events.

Kyrgios won the Citi Open in Washington D.C. for a second time last weekend while Medvedev did not drop a set en route to lifting the trophy in Los Cabos.

"Medvedev is coming from a title too and he is the number one in the world," said Kyrgios, who holds a 2-1 head-to-head lead over the Russian.

"It's not like the rankings mean too much as the guy I played today is ranked ahead of me. But Medvedev is a machine."

Kyrgios is currently ranked 37 in the world but would be higher if ranking points had been handed out at this year's Wimbledon. Baez is number 32.

Under the lights in the evening session, Taylor Fritz beat a frustrated Andy Murray 6-1 6-3 in their rain-delayed first-round clash.

Fritz was nearly flawless in the first set, unleashing his unique mix of power and finesse to put the former world number one from Scotland on the back foot.

Murray fought hard in the second, but could not solve the puzzle the towering American presented in their first career meeting and smashed his racket against the court at several points in frustration.

Next up for Fritz is a meeting with countryman Frances Tiafoe after he battled back from a set down to see off Benjamin Bonzi 6-7(6) 7-5 6-3.

In other first-round action, Frenchman Gael Monfils returned to the ATP Tour after a three-month break with a 7-6(4) 3-6 6-2 win over Pedro Martinez and will next face American Maxime Cressy, who was a 6-4 6-4 winner over Aslan Karatsev. 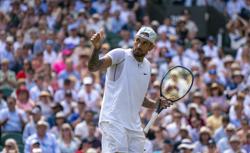 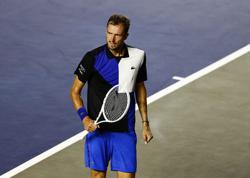