Tennis-Wawrinka and plenty of rain fall at Canadian Open

(Reuters) - Stan Wawrinka's attempts to get his comeback season off the ground took another hit on Monday as the three-time major champion fell 6-3 3-6 6-3 to Emil Ruusuvuori in the rain-delayed opening round of the Canadian Open in Montreal.

Wawrinka, 37, missed the clay, grass and hardcourt season last year following surgery on his left foot and since returning in March has suffered a slew of first round exits.

Next up for the Ruusuvuori is a second round clash with Hubert Hurkacz, who the Finn defeated in Washington last week for the biggest win of his career.

Karen Khachanov came out on the winning side in a sloppy three-set match against Francisco Cerundolo, where the players made a combined 110 unforced errors compared to just 45 winners.

The Russian has played well at the tournament in the past, reaching the semi-finals in 2018 and 2019.

In other first round action, 21-year-old American Jenson Brooksby made quick work of Alexander Bublik with a 6-2 6-3 win and Slovak Alex Molcan outlasted Mackenzie McDonald 7-6(1) 6-4.

Heavy rain delayed the start of the Masters 1000 tournament for hours and forced the postponement of Andy Murray's highly anticipated first round match against Taylor Fritz to Tuesday. 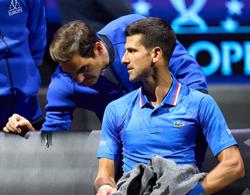