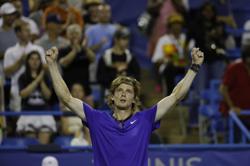 (Reuters) - Japan's Yoshihito Nishioka, ranked 96th in the world, beat top seed Andrey Rublev 6-3 6-4 on Saturday, continuing his stellar show at the Citi Open in Washington, D.C., and setting up a showdown against Australian Nick Kyrgios.

The 26-year-old left-hander came to the U.S. capital having won five out of seven matches on the feeder Challenger circuit last month, but had not won a tour-level match since the Miami Masters in March.

On Sunday, Nishioka will play for the biggest title of his career at the ATP 500 event against 2019 champion Kyrgios, who defeated Sweden's Mikael Ymer 7-6(4) 6-3 in the other semi-final.

"I love to play here; I have been here many times. But for tomorrow, everyone loves Nick as well," Nishioka said. He added that he hoped the crowd would still cheer for him, and that he just planned to enjoy the day.

Nishioka, who reached a career-high ranking of 48th in 2020, knocked out Atlanta runner-up Jenson Brooksby in the first round, then beat three seeded players - Alex De Minaur, Karen Khachanov and Dan Evans - before stunning eighth-ranked Rublev.

He needed three hours and 35 minutes on Friday to defeat Britain's Evans.

"Today I felt very tired before the start of the match, and I felt I (couldn't) do the same thing like I did against Evans and Khachanov," Nishioka said. "I tried to be a little bit aggressive, because I knew Andrey was going to play aggressive to me."

Wimbledon runner-up Kyrgios, ranked 63rd, has a 3-0 head-to-head record against the left-hander and will climb up the rankings ladder to 37th if he lifts the trophy.

The big-serving Australian won the last of his six ATP titles at the same event in Washington in 2019.

"We've played many times, but he beat me every time since (we were) 16 years old. It is really tough to play against him," Nishioka said.

(Reporting by Sudipto Ganguly in Mumbai; editing by Gerry Doyle) 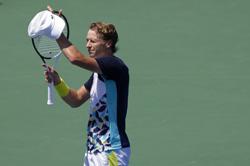 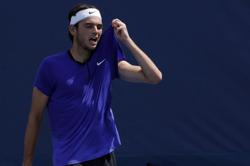