LONDON (Reuters) - Nick Kyrgios has waited a long time to seriously challenge for a Grand Slam title since rocking up at Wimbledon as a teenager in 2014 and reaching the quarter-finals.

The intervening years have taken the maverick Australian to some dark places and he continues to make headlines for the wrong reasons, even during this fortnight with Tuesday's news that he faces a charge of alleged assault in Canberra.

But there is something in the way the 27-year-old has reached his first Grand Slam semi-final, in which he faces Rafa Nadal, that suggests he is ready to prove the doubters, including himself, wrong.

Against Cristian Garin on Wednesday, Kyrgios found himself favourite for the first time in a Grand Slam quarter-final, having faced Milos Raonic here in 2014 and Andy Murray in the last eight at the 2015 Australian Open.

Even without playing his best tennis, Kyrgios handled it in composed fashion, winning 6-4 6-3 7-6(5) on Court One.

After sealing the win to become Australia's first male Grand Slam semi-finalist for 17 years, Kyrgios sat in his courtside chair, lost in his thoughts.

Later he explained what had been going through his mind.

"Just how things can change. There was a point where I was almost done with the sport," he told reporters.

"Obviously I posted this year about the kind of mental state I was in in 2019 when I was at the Australian Open with self-harm and suicidal thoughts and stuff.

"I'm sitting there today after the match... to be a semi-finalist at Wimbledon, it's a special accomplishment for everyone, but I think especially for me."

So much negativity has swirled around Kyrgios in recent years that even he thought his chance of standing one match from a Grand Slam final had long gone.

"I almost started doubting myself with all that traffic coming in and out of my mind.

"I just sat there today and soaked it all in. At the same time I feel like I don't want to stop here either.

"I've got a lot left in the tank. I feel like I'm probably playing some of my best tennis, mentally feeling great."

Standing between Kyrgios and the Wimbledon final is 22-time Grand Slam champion Nadal, the man he sensationally beat on the way to the quarters in 2014.

With Nadal edging Taylor Fritz, despite an abdominal injury, to keep alive his quest for a calendar year Slam, the stage is now set for a seismic clash on Friday.

Kyrgios was certainly not under-selling it.

"I feel like that would be a mouth-watering kind of encounter for everyone around the world," he said.

"That would probably be the most-watched match of all time. I would argue that." 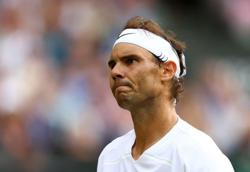 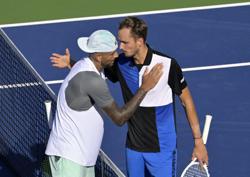