Tennis-Halep harnesses spirit of 2019 to race into Wimbledon semis LONDON (Reuters) - Simona Halep recalls her 2019 Wimbledon final triumph as the perfect match but the message the Romanian sent out after racing into the semi-finals on Wednesday was that she was back to her best and loving it.

The 16th seed blasted past American Amanda Anisimova 6-2 6-4 in a Centre Court clash that lasted just over an hour to set up a meeting in the last four with Russian-born 17th seeded Kazakh Elena Rybakina.

"I'm playing the best tennis since I won here. I'm building that confidence back and it is good right now," said the former world number one, who swept aside Serena Williams in that 2019 final, before leaving the court.

The Romanian, who missed last year's tournament through injury and is now the only former champion left in the draw, has yet to drop a set in five matches that have taken up less than six hours of her time.

She said being back in a semi-final, and at one of her favourite tournaments, was just a joy.

Last year she had contemplated retirement due to her injuries.

"I am different as a person. I really believe that. I am stronger, like, with my emotions. I can control emotions much better. I have experience," she said.

Halep will need that against a big-hitting opponent who has so far served 44 aces but she said she was ready for the challenge.

"All the matches were different than in 2019. So I'm just taking the confidence, I'm taking the pleasure of being on the court," she said.

"I think every match I got a little bit better. I had tough opponents, and I did what I had to do every day."

Anisimova said she could have played better but just felt "very stiff and frozen" on court.

"It just happens, I guess. You can't be stress-free in every single match. Just today was that way," she said. 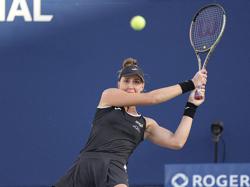