LONDON (Reuters) - Ukraine's Lesia Tsurenko reached the second round of Wimbledon on Monday but with Russian missiles raining down on her home country she insisted winning or losing tennis matches had ceased to exist as a priority in her life.

After beating Britain's Jodie Burrage, the 33-year-old spoke candidly about the emotions of playing at the tournament while her home city of Kyiv comes under renewed attack.

"I don't feel good. I feel really worried, especially because I know that they are trying to get the one object, which is 100 meters away from my home, from the building where I live," she told reporters at the All England Club.

"I think when the war started, I start to feel this tension inside of me every time the area where I live gets bombed. And I think even if I work every day with a psychologist, and I try to, to try to avoid these emotions, it's impossible."

Tsurenko will face fellow Ukrainian Anhelina Kalinina next when she says she would like both to wear yellow and blue ribbons on their tops as a show of solidarity, although she was unsure whether Wimbledon would allow it.

Wimbledon's ban on Russian and Belarussian in the wake of Russia's invasion of Ukraine means both are spared the 'tension' of coming face to face with anyone from those countries.

Tsurenko said she was relieved that Russian and Belarussian players were absent, even if it was nothing personal.

"I feel good being at the tournament without having to see players from those countries again. In most of the cases it's nothing personal," she said.

"It's just the situation is that that our countries are in a war now. For me it's definitely less tension and I feel better."

She said only one player from Belarus had openly expressed support for Ukraine to her.

"I haven't heard from anyone else that they are against the war. So I don't know their opinion about that, and not speaking to me and not saying to me anything makes me feel bad and creating this tension inside of me," she said.

Tsurenko has been on the road more or less since the invasion began and said she has noticed the support of the fans whether it be in Indian Wells or London.

But nothing can compensate for the destruction in Ukraine.

"For me emotionally winning or losing doesn't exist anymore. For me, there is a big issue in my life: it's war. And there is nothing else that can beat this," she said.

"The toughest part now is that a lot of people that I know are on the front line now. One guy has been taken by Russians, we don't know that he's alive. Two more guys are fighting there at the moment, and a few people are dead because of the war." 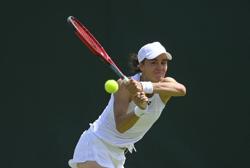