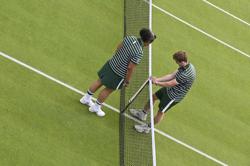 PARIS (Reuters) - Highlights of the fourth day at the French Open, the second Grand Slam of the year, on Wednesday (times GMT):

It's like we do not exist, says Ukrainian Kostyuk

Shapovalov finds fault with both Wimbledon and ATP decisions

World number one and defending champion Novak Djokovic reached the third round with a comfortable 6-2 6-3 7-6(4) victory over Slovakia's Alex Molcan.

The top seed will next meet Slovenia's former world number 43 Aljaz Bedene for a place in the fourth round.

Zverev was 4-2 down in the deciding set but the German fought back and saved a match point before wrapping up victory over his 21-year-old opponent.

"I lost a U.S. Open final being two sets up and I've learned from it," said Zverev. "He (Baez) is unbelievable and he's got a bright future ahead of him.

"I just tried to fight. You have to win these kind of matches, when you're not playing well because you can't always play well."

Sakkari is the latest casualty among the women's top seeds after Tunisia's Ons Jabeur (6) and defending champion Barbora Krejcikova (2) were knocked out in the first round.

American Coco Gauff, 18, battled through a tough second set to defeat Belgium's Alison Van Uytvanck 6-1 7-6(4) and reach the third round.

In the men's draw, British 10th seed Cameron Norrie advanced to the third round by beating Australia's Jason Kubler 6-3 6-4 6-3.

American Amanda Anisimova, the 2019 semi-finalist, advanced to the third round with a 6-4 6-1 victory over Croatia's Donna Vekic.

The 27th seed, who knocked out Naomi Osaka in the first round, will face Muchova in her next match.

Former world number one Angelique Kerber of Germany saw off a spirited challenge from local wildcard Elsa Jacquemot, reaching the third round with a 6-1 7-6(2) win.

1112 RADUCANU KNOCKED OUT BY SASNOVICH

U.S. Open champion Emma Raducanu, playing her first French Open, crashed out in the second round after losing 3-6 6-1 6-1 defeat to the unseeded Aliaksandra Sasnovich.

Twice major winner Victoria Azarenka held off 2014 semi-finalist Andrea Petkovic in a tight second set to secure a 6-1 7-6(3) win and advance to the third round.