Tennis - French Open - Roland Garros, Paris, France - May 22, 2022 France's Quentin Halys in action during his first round match against John Isner of the U.S. REUTERS/Dylan Martinez

PARIS (Reuters) - Highlights of the first day at the French Open, the second Grand Slam of the year, on Sunday (times GMT):

Canadian ninth seed Felix Auger-Aliassime fought back from two sets down to beat Peru's Juan Pablo Varillas 2-6 2-6 6-1 6-3 6-3 and move into the second round.

American John Isner converted only one break point but won three tiebreaks in his first-round match against Quentin Halys to advance with a 7-6(3) 4-6 7-6(1) 7-6(6) victory.

Estonian Kaia Kanepi rallied from a set and a break down to topple 10th seed Garbine Muguruza, sending down 34 winners to wrap up a 2-6 6-3 6-4 victory and hand the former French Open champion her ninth loss of the year.

Tunisian Jabeur, seen as one of the main threats to world number one Iga Swiatek, arrived in Paris with a tour-leading 17 wins on clay.

Dominic Thiem, twice runner-up at Roland Garros, exited in the first round for the second straight year as he made 42 unforced errors en route to a 6-3 6-2 6-4 defeat by Bolivia's Hugo Dellien.

The Austrian is still searching for his first win of the year and has struggled for form since returning to action in March following a wrist injury.

Bulgarian Grigor Dimitrov, who retired due to injury during his first-round match against Marcos Giron in Paris last year, started his campaign in fine form by crushing the American 6-1 6-1 6-1 in an hour and a half.

Romania's Sorana Cirstea hit 34 winners and won the last six games in a row to beat Tatjana Maria 6-3 6-3 and move into the second round, where she will face Sloane Stephens or Jule Niemeier.

Play began under cloudy skies on the opening day of action at Roland Garros, with the temperature hovering around 21 degrees Celsius (70 degrees Fahrenheit).

Twice runner-up Thiem crashes out at first hurdle in Paris

Medvedev not going to court over Wimbledon ban on Russian players

Jabeur brimming with confidence ahead of French Open

Unconcerned about back problem, Raducanu excited for French debut 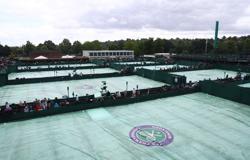