MELBOURNE (Reuters) -American Danielle Collins showed she will provide a formidable obstacle to home favourite Ash Barty's hopes of winning the Australian Open with a crushing 6-4 6-1 defeat of Poland's Iga Swiatek to reach her first Grand Slam final on Thursday.

World number one Barty will be the overwhelming favourite on Saturday as she attempts to become the first local to win the Australian Open since Chris O'Neil in 1978.

But the 28-year-old Collins, a product of the American college system and twice an NCAA champion, showed against Swiatek that she can mix it with the best.

She made a lightning start on Rod Laver Arena, overwhelming Swiatek with her power and aggression to race into a 4-0 lead.

Seventh seed Swiatek responded to claw back some of the damage but 28-year-old Collins held firm to close out the set.

It was a repeat show in the second set as a dominant Collins, who elected not to sit down at changeovers such was her eagerness to get the job done, again roared 4-0 ahead.

This time there was no counter-attack by Swiatek as Collins, showing no nerves as her date with destiny loomed, wrapped up victory on her second match point in 78 minutes.

"It feels amazing. It has been such a journey. It is so many years of hard work," Collins, who last April required emergency surgery for endometriosis, said on court.

"It is incredible to be on this stage, especially after all the health challenges. I couldn't be happier."

The 20-year-old Swiatek is well-known for her problem-solving ability on the court, as she demonstrated by winning the 2020 French Open, but she said she was taken by surprise at the power Collins brought to the court.

"I was prepared for her playing aggressive, but I think that was the fastest ball I have ever played against on a match," Swiatek told reporters.

"In practices I have hit maybe the same speed, but in matches players don't want to take that much risk. But for her it wasn't even risky because she was playing it with control."

Until her run to the 2019 semi-finals in Melbourne, Collins had never won a main draw match at a Grand Slam.

Three years later, a place in the world's top-20 is guaranteed and her slow-burning career is taking off.

And she sounds undaunted about trying to prevent Barty becoming the first Australian to claim the title for 44 years.

"We've had some incredible battles over the years. To play the world number one in her home country will be spectacular," she said. "The energy the crowd will bring, whether it's for me or against me, it will be a incredible." 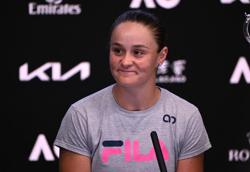 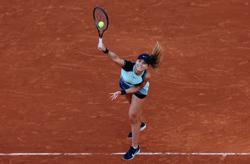