(Reuters) - Belarusian Daniil Ostapenkov, a junior player who has not played professional-level match before, stunned world number 15 Diego Schwartzman 6-4 6-3 in their World Group I Davis Cup match on Saturday.

The 18-year-old became the latest young gun to cause an upset following a U.S. Open where teenagers seized the spotlight and 18-year-old Briton Emma Raducanu became the first qualifier to win a Grand Slam title.

The win gave Belarus a 1-0 lead in the best-of-five match against the 2016 champions.

The teams playing in World Group I are bidding for a place in the 2022 Davis Cup qualifiers, a step closer to the Finals. 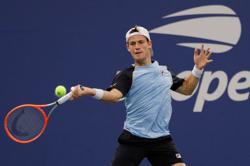