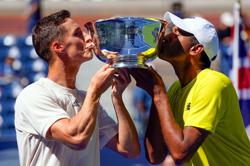 Salisbury was also competing in his third straight mixed doubles Grand Slam final but was on the losing side at Wimbledon, where Krawczyk partnered with Neal Skupski.

For Salisbury the win completed a U.S. Open doubles double having also won the men's championship on Friday with Rajeev Ram.

The 29-year-old Salisbury becomes the first player to sweep U.S. Open men’s and mixed doubles titles since Bob Bryan in 2010.

Krawczyk and Salisbury broke open a tight contest with a break to go up 6-5 before holding serve to take the set.

The duo carried that momentum into the second with an early break to move ahead 2-0 and would break Olmos and Arevalo again to go up 5-2 before serving out the match.