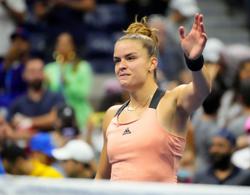 NEW YORK (Reuters) - "Bad memories" from Roland Garros may have foiled Maria Sakkari at the U.S. Open on Thursday, as the 17th seed fell in the semi-final of a Grand Slam for the second time this year.

The Greek was the favourite heading into her encounter with 18-year-old qualifier Emma Raducanu on Arthur Ashe Stadium but was totally outplayed, losing in straight sets, struggling on serve and putting up 33 unforced errors.

Sakkari lost to Czech Barbora Krejcikova in the French Open semi in June, a nail-biting three-setter.

"Things don't go your way most of the times. You just have to accept that."

She came up short at Flushing Meadows but she has much to be proud of, beating former champion Bianca Andreescu in a gruelling three hour, 30 minute fourth-round match and defeating world number four Karolina Pliskova in the quarters.

"I'm a person that I'll go back home and I'll start working hard again because I'm having the best season of my life," she added.

"I still have very good chances of finishing where I want to finish this season no matter what happened here.

"It's just that I have to keep believing in myself, keep doing what I'm doing."

She offered words of praise for Raducanu, the first qualifier to reach a Grand Slam final, and her opponent in the decider, 19-year-old Canadian Leylah Fernandez.

"It's huge what she has accomplished. They are both young. They play fearless. They have nothing to lose playing against us," she said. "They're out there fighting for that title. Very well done to both for getting here." 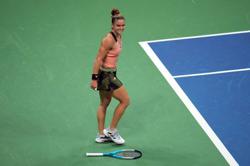