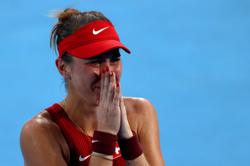 In the men’s event, world No 1 Novak Djokovic continued his quest to become the first player to win all four Grand Slams and Olympic gold in the same year since Steffi Graf in 1988.

He cruised to a 6-2, 6-0 victory over Kei Nishikori, ending Japan’s hope for a singles medal at home. He will next play either German fourth seed Alexander Zverev or Frenchman Jeremy Chardy for a place in Sunday’s final.

Bencic was in tears after she closed out a nervy battle against 20th-ranked Rybakina, who squandered multiple leads during the contest on Centre Court.

The victory will ensure a tennis medal for Switzerland for the fourth Olympic Games in a row, while Bencic will have a chance to be the first woman to win singles gold for the country.

“I mean my emotions right now are too high. To have the medal, for me it’s the greatest thing ever to be here as an athlete for the Olympics,” the 24-year-old told reporters.

“It’s amazing, and also to have a medal, it’s something I dreamt off and I didn’t think it will become reality.”

Bencic will face Marketa Vondrousova of the Czech Republic, who hammered Ukraine’s Elina Svitolina 6-3, 6-1 in the other semis, for gold.

In their first meeting, Karen Khachanov edged Frenchman Ugo Humbert 7-6 (7-4), 4-6, 6-3 in a closely-fought match to book a spot in the men’s semi-finals against either fellow Russian Daniil Medvedev or Pablo Carreno Busta of Spain.

Khachanov, who is playing for the Russian Olympic Committee team, said he would next root for world No 2 Medvedev. — Reuters

“It would be amazing for our country that one of us will play in the final and another one still will have a chance to fight for the bronze medal,” Khachanov said. — Reuters 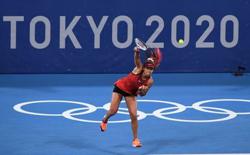