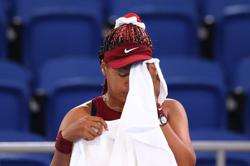 TOKYO (Reuters) - Japan's Naomi Osaka said she was happy with her experience at the Tokyo Games despite her stunning 6-1 6-4 loss to Marketa Vondrousova in the third round on Tuesday.

The 23-year-old world number two - one of the country's biggest medal hopes who just days earlier had lit the Olympic cauldron - acknowledged that she had been under pressure to perform, but was nonetheless satisfied with her maiden outing at the Games.

"For me, I'm really glad to be here. I'm sad that I lost of course, but all-in-all, really happy with my first Olympic experience," she told reporters after her match.

Osaka, who won the U.S. Open last year, said she had no immediate plans following the end of her Olympics campaign, saying she had not yet thought about preparing to defend her title in New York.

"For me, I'm sort of a person that wings a lot of things, so that's either a really good thing or a really bad thing."

The four-time Grand Slam champion had been looking to become only the fourth singles player since 1988 to win Olympic gold on home soil.

Osaka's loss followed the exit of world number one and Wimbledon champion Ash Barty, who was beaten in Sunday's first round.