LONDON (Reuters) - Japan's world number two Naomi Osaka must take the time to be in a "safe space" and seek help to figure out the dilemma she finds herself in, according to American tennis great Chris Evert.

Osaka withdrew from the French Open before the second round in the wake of controversy caused by her decision to skip mandatory post-match news conferences at the tournament.

She revealed that she had been suffering bouts of anxiety and depression since bursting into the limelight by winning the U.S. Open in 2018, the first of her four Grand Slams.

Osaka is yet to announce whether she will return to play at Wimbledon which starts on June 28.

"I have no idea, I don't know, I'm not in her head," Evert, an analyst for broadcaster Eurosport, told Reuters when asked whether Osaka should play at the grasscourt championships.

"You have to walk in someone's shoes. I just hope she takes the time that she needs to get away to be in a safe place, a safe space, to have good people around her.

"She needs professionals to help her figure it out, the dilemma that she's in."

Osaka was 20 when she won her first major at Flushing Meadows and Evert said the sudden fame and fortune can be overwhelming.

"It's getting adjusted to that in life."

Evert offered some sympathy for Osaka's claim that the questioning by journalists at post-match news conferences can affect a player's mental wellbeing.

"I think the press needs to give these younger players the room to grow," the American said. "Don't make them feel traumatized with questions, repeating questions or asking personal questions. The press are a big part of this and they need to change as well."

However, Evert rejects calls for players not to have to attend post-match media duties.

"The players have a responsibility to talk about their match, not their love life, or any other issue," she said. "But if they are making this much money, then take an hour, hour and a half, cool down after a loss, come in for 15 minutes and just answer a few questions about how you played, what was the turning point.

"Those questions are fair game. The press have helped the game of tennis, helped brand these players."

The Women's Tennis Association (WTA) has said it will undertake a review of post-match media requirements while Wimbledon organisers say they are working together to create meaningful improvements. 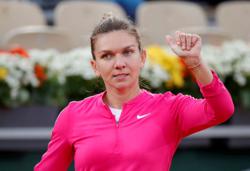