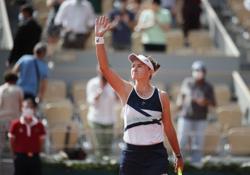 (Reuters) - Ukrainian Dayana Yastremska's second appeal for her provisional doping suspension to be lifted has been denied by the chair of the independent tribunal convened to hear her case, the International Tennis Federation said in a statement https://antidoping.itftennis.com/news/318940.aspx.

Yastremska, 20, was suspended in January after the World Anti-Doping Agency (WADA) found a banned substance in an out-of-competition urine sample she submitted.

The ITF had denied Yastremska's earlier application to have the suspension lifted, prompting the world number 31 to approach the Court of Arbitration for Sport which dismissed her appeal in February.

That decision left Yastremska ineligible to play in the Australian Open, the year's first Grand Slam, after the player had travelled to the country in the hope that her suspension would be lifted.

The ITF said in its statement on Tuesday that Yastremska "remains ineligible to compete" pending the final resolution of her case.

Yastremska had provided her urine sample in November and a WADA laboratory in Montreal found the presence of mesterolone metabolite, an anabolic agent on its Prohibited List.

She has denied using performance-enhancing drugs and said the positive test was the result of a "contamination event".

(Reporting by Shrivathsa Sridhar in Bengaluru; Editing by Lincoln Feast.)