(Reuters) - Swiss Belinda Bencic said players could get injured if they have to compete immediately after a hard quarantine in Melbourne and hoped Australian Open organisers would make the situation fairer for those confined to their rooms for 14 days.

The world number 12 is one of the 72 players who are not allowed to leave their hotel rooms in Melbourne after some passengers on the three charter flights that brought them to Australia tested positive.

Their fellow competitors, who travelled on charter flights which did not return any positive cases, are also in isolation but are able to spend five hours a day outside their rooms to practise for the year's first Grand Slam.

At the end of isolation the players are scheduled to participate in tune-up events from Jan. 31 at Melbourne Park before the Feb. 8-31 Grand Slam at the same venue.

"Now I feel more positive about it and I'm trying to do the most I can do to get out of quarantine," Bencic, 23, told reporters on a video conference call from her room on Friday.

"The priority is to not get injured as that is I feel like the biggest risk. Being in the room for 14 days and then playing a tournament the next day or we have two days in between, it's just really a big risk.

"The tennis level will not be there, but we can just try and do our best."

It was initially difficult for 23-year-old Bencic to accept the situation while her colleagues were able to train and prepare for the Grand Slam.

The Swiss, who is joined by her coach and boyfriend in the room, spends most of her time sleeping and cannot wait to breathe fresh air and be out in the sun when her isolation ends.

"I'm trying to play tennis," she said, ruing that her hard work in pre-season has gone to waste.

"We tried to move the bed and the furniture into the bathroom or into the hallway and then I tried to hold the racket, play tennis, kind of simulate so my muscles don't forget and they are still active."

Australian Open boss Craig Tiley has ruled out any change to the schedule of the Grand Slam but has said that organisers were contemplating moving back the lead-up events to allow more time for those in hard quarantine.

"The main priority is to make it as equal as possible for all the players competing because of course, in this weird situation it's far from equal," Bencic said.

"Many players have a much bigger advantage. It's not like there's only one or two players in quarantine but there's 72.

"I think they are doing the best they can to make it (if) not completely equal and fair options... the closest that it can be."

(Reporting by Sudipto Ganguly in Mumbai; Editing by Ken Ferris) 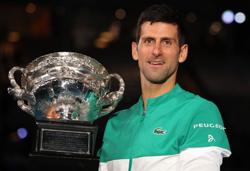 Medvedev gets another shot at No.2 ranking after Nadal pullout
Chasing pack need to believe they can topple 'Big Three' - Nalbandian
Pandemic helped Swiatek deal with French Open success
Nadal pulls out of Rotterdam Open with back issue
Barty party over in Australia amid doubts over top ranking
Injured Barty withdraws from Qatar Open
Halep pulls out of Qatar Open
Chasing pack not close to toppling 'Big Three', says Murray
Australian Open beats the odds to lay out a blueprint
World number one Barty uncertain of schedule as Osaka closes in