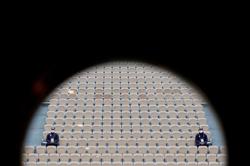 PARIS (Reuters) - Former champion Garbine Muguruza said there was no such thing as a relaxing match these days after narrowly avoiding a first-round exit at the French Open on Monday when she battled for three hours to beat Slovenia's Tamara Zidansek 7-5 4-6 8-6.

The Spaniard, who reigned on the clay in 2016, looked in big trouble as she trailed 3-0 in the final set to the world number 83 but, unlike several other big names who are packing their bags, the 26-year-old survived to fight another day.

Zidansek lost her only previous main-draw match at Roland Garros but asked all sorts of questions of Muguruza who struggled to hit through a tricky opponent boasting a rock-solid defence and a nice line in disguised drop shots .

Muguruza needed treatment for a blister on her hand at 3-4 in the final set and saved a break point in the next game.

She ended the match with 64 unforced errors but crucially played her best tennis when it mattered most, breaking the Zidansek serve at 6-6 with a crosscourt forehand winner before sealing victory on her first match point.

Former world number one Muguruza, playing in black leggings and a purple roll-neck zip-up top in the chilly conditions, had also hit back from 0-3 down to take the opening set.

But she dropped serve in the 10th game of the second to send the match to its gripping decider.

With another former champion Svetlana Kuznetsova, last year's runner-up Marketa Vondrousova and three-time Grand Slam champion Angelique Kerber all losing in round one, Muguruza said she was just happy to make it through.

"Definitely the level has increased. Now everyone is more fit and prepared, and physically it's a huge difference compared to probably a decade ago," Muguruza told reporters.

"It's always like little details at the end between the great players and the good players. Especially in first rounds, you can always have surprises. There are no relaxing matches." 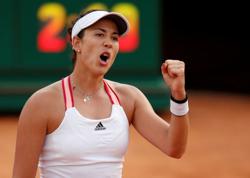 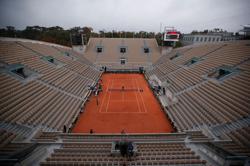