Spain drawn with Russia and Ecuador in Davis Cup

LONDON (Reuters) - Holders Spain were drawn against Russia and Ecuador when the six groups for this year's Davis Cup Finals to be held in Madrid's La Caja Magica were announced on Thursday.

Russia were also in Spain's group in the inaugural version of the revamped event featuring 18 nations last November, reaching the semi-finals where they lost to Canada.

Ecuador booked their place in Madrid by beating Japan in last week's qualifiers.

Canada, the second seeds, will face Kazakhstan and Sweden in Group B while record Davis Cup winners the United States are in Group E alongside Italy and Colombia.

Britain, who lost to Spain in last year's semi-finals, will play France and Czech Republic in the group phase.

Group D comprises Croatia, Australia and Hungary while Novak Djokovic's Serbia are with Germany and Austria.

The group winners and two best-performing runners-up will advance to the knockout phase of the competition.

Last year's event, the first since it was changed from the 16-team World Group knockout-style format played over three weekend during the year and culminating in a final, produced exciting action but was a challenge in terms of scheduling with matches often completed in the small hours.

The International Tennis Federation entered into a 25-year, $3 billion partnership with Spanish investment firm Kosmos in 2018 to rekindle the Davis Cup.

The Finals have a combined $20 million prize pool with the winning team sharing $3.2 million and a further $1.2 million going to the winning federation. 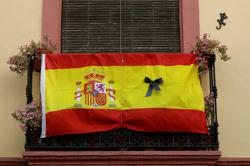 With black masks and silence, Spain mourns its coronavirus dead