Swimmer Yie Bing has ‘Chunky’ reason to be a vet

LOO Yie Bing is determined to become a veterinarian after her dog Chunky, which she adopted from her neighbour, died.

She was not able to do anything to save it and that had bothered her.

“I adopted the dog from my neighbour and became attached to it. But she passed away recently after falling sick,” said Yie Bing.

“I couldn’t do anything but I hope to study veterinary science overseas so I that can help treat animals.”

The 15-year-old has a few more years to go before becoming a future vet but for now, the swimmer continues to show her unwavering focus on making a big splash for Sabah in the Malaysia Games (Sukma).

Yesterday, Yie Bing made it a perfect three out of three in two days when she sprinted her way to the 100m freestyle and 50m butterfly titles at the National Aquatic Centre in Bukit Jalil.

Her performances ensured that the Sabah swimming team will return with a better performance compared to the previous Sukma in Ipoh in 2018 where they only won one gold.

“I was hoping to break it here in Sukma but it didn’t happen,” said Yie Bing.

“I was panting for breath and my strokes slowed down towards the end.

“Maybe I was nervous at the start but I tried my best once I hopped into the pool,” said Yie Bing, who had just splashed to the new national mark back in June.

Yie Bing, who is hopeful of competing in the Cambodia SEA Games next year, still have three more events – the 50m freestyle, 50m backstroke and 100m butterfly over the next three days.

SEA Games champion Khiew Hoe Yean made his entrance in style by winning the men’s 200m individual medley from behind. The 19-year-old overtook Federal Territories teammate Jayden Tan to gold after coming home in 2:04.35. 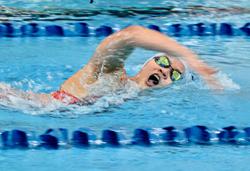 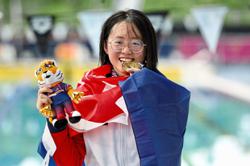