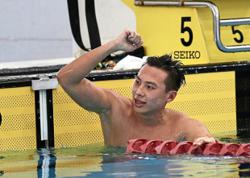 PHEE Jinq En fell short in her bid for a fourth straight SEA Games title in the women’s 100m breaststroke, but she was still all smiles.

The 25-year-old showed she was still a fighter as she wrapped up what could be her last Games outing in Hanoi with a silver in her pet event at the My Dinh Aquatic Centre last night.

Jinq En was outside medal contention after the first 50m but pushed hard to eventually take silver in 1:09.60.

Singapore teenager Letitia Sim, who is based in the United States, managed a double when she finished in 1:08.79. She had earlier won the 50m breaststroke too.

It is the first time since the 2003 SEA Games, also in Hanoi, that Malaysia had failed to win the women’s 100m breaststroke event.

Although dethroned as the region’s top woman breaststroker, Jinq En had no regrets about her performance.

“I finally got a medal here. Honestly, I thought I would be only going for bronze as it was looking like the worst SEA Games outing for me,” she said.

“After the first two events, I rated myself a 1 out of 10 but I think I got 7 out of 10 tonight. Any medal is fine for me. The time was not great but I am also not getting any younger. It’s time the younger swimmers step up,” said Jinq En, who won both the 50m and 100m breaststroke at the last Games in Philippines in 2019.

Her silver is the only medal won by a Malaysian woman swimmer in Hanoi this time.

Khiew Hoe Yean earned a bronze in the men’s 800m freestyle final last night. The KL-born swimmer paced himself well to finish in 8:06.71 with Nguyen Huy Hoang taking gold for the hosts in 7:57.65.

Hoe Yean won the only gold for Malaysia in the 200m freestyle on Wednesday and the swimming team will return home after one of their worst outings in SEA Games history. 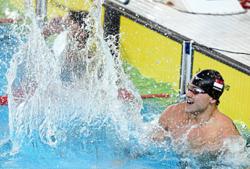