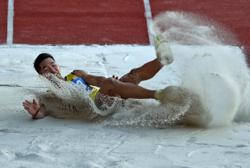 I’ll do better: Welson Sim won silver in the men 400m freestyle at the Manila Games in 2019.

KUALA LUMPUR: After failing to defend his gold medal feats at the 2019 SEA Games in Manila, national swimmer Welson Sim has vowed to do so at the upcoming Games in Hanoi this May.

Welson splashed to two gold medals in the 200m and 400m freestyle events at the 2017 SEA Games here, but failed to reproduce the same form in the Philippines and won silver in both events.

“The 200m and 400m freestyle are my pet events and this year I’ll definitely focus to gain back my throne in the SEA Games,” he said during the welcoming of the Queen’s Baton Relay of the 2022 Birmingham Commonwealth Games at KLCC yesterday.

He has also set his sights to make waves in the next Commonwealth Games in July as well as the Asian Games in Hangzhou, China, in September.

As such, the two-time Olympian has increased the intensity in training leading up to the three major Games this year in a bid to make a splash in the pool and break his own national records again.

“I won’t be going for training overseas but I’ll stay here to prepare for the three major Games this year,” he added.

In the meantime, Welson was pleased to see the rise of Khiew Hoe Yean.

Hoe Yean started to gain attention after clinching eight gold medals at the Invitational Age Group Swimming Championships in March 2020, before making headlines again at the 63rd Malaysia Open in June last year, despite months of inaction due to the Covid-19 pandemic.

Wendy also aims to bounce back stronger following a disappointing outing at the 2020 Tokyo Olympics, where she failed to qualify for the semi-finals after she finished in 20th place in the qualifying round. — Bernama

Swimming-Chalmers hopes '40-year-old' body can hold up until 2024 Games
Double push proves too much for Hoe Yean
Coach Martin wants Welson and Co to return stronger
Jinq En warming up for defence of 50m breaststroke gold
Welson and Co finish second but disqualified minutes later
Hao Sheng can walk tall despite loss
Only ripple in pool expected from our swimmers
Swimming Sikh set to soar again
Swimming-Peaty out of world championships with fractured foot
Swimming-Dressel and Ledecky shine at U.S. trials