Swimmer Phee Jinq En posing in front of the Olympic Village in Tokyo.

PETALING JAYA: Swimmer Phee Jinq En raised cheers for Malaysia from the pool when she smashed her own national record in the women's 100m breaststroke heats at the Tokyo Aquatics Centre.

The 23-year-old clocked 1:08.40 to finish a close second in Heat 2 behind Slovakian Andrea Podmanikova (1:08.36), and went on to slice 0.10s off her own national record set two years ago when she took gold at the Philippines SEA Games.

Despite her gusty effort, she placed 29th overall and did not make the cut for the top 16 semi-finals to take place the next day.

South Africa Tatjana Schoenmaker stunned the field with a new Olympics record, clocking 1:04.82 to break the previous best of 1:04.93 set by American Lilly King in Rio five years ago.

Another American swimmer Lydia Jacoby was second fastest with 1:05.52 while the current world record holder and defending champion King was third with 1:05.55. 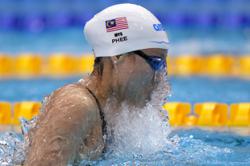