TOKYO (Reuters) -Japan suffered an opening session blow on Saturday when their gold medal hope Daiya Seto failed to qualify for the men's 400 metres medley final after finishing ninth in the heats.

The 27-year-old Seto, the world champion and top ranked in the event, was the bronze medallist in Rio five years ago and favourite to win gold in Sunday's final before his shock exit.

"I miscalculated and didn't put everything into the race like I did in Rio," Seto said.

The Japanese hope will also compete in the 200 metres butterfly and said he would need to refocus quickly. "I will just have to put this out of my mind," he added.

Australia's Brendon Smith was fastest with a time of 4:09.27 followed by New Zealand’s Lewis Clareburt and American Chase Kalisz in what proved to be a highly competitive heat. 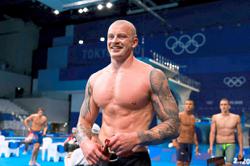