BUDAPEST (Reuters) - Britain's Kathleen Dawson won the women's 100 metre backstroke final twice in one night at the European swimming championships on Friday after the first result was annulled.

Sweden made a successful official protest after Louise Hansson started late in lane eight due to a signal malfunction and the race was ordered to be re-run at the end of the programme.

Dawson had won the first race in 58.18 seconds but returned to the Budapest Duna Arena pool two hours later to do it all again, this time in 58.49.

"My coach got me back into the right mindset and sure enough I was able to go through and produce the swim that I did," she said.

Kira Toussaint of the Netherlands had less to celebrate, finishing fourth after ending the first final in the silver medal position, with Italy's Margherita Panziera coming through in the re-run.

Russia's Maria Kameneva was third in both.

"I'm sort of feeling I haven't deserved this," said Panziera. "I feel like Kira should have won this medal but sometimes the luck changes and I took my chance."

Britain won two more golds, with Molly Renshaw in the 200m breaststroke and Lucy Hope, Tamryn van Selm, Holly Hibbot and Freya Anderson in the 4x200m freestyle, to return to the top of the medals table with seven golds.

Russia also has seven golds from five days so far in the pool but two silvers to Britain's five. 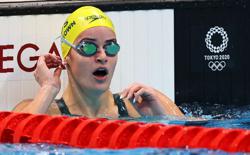