SYAFIQ Kamal and Noor Ainaa Amani Ampandi started Malaysia’s campaign in the doubles competition by advancing to the second round of the mixed doubles at the University of Birmingham Squash and Hockey Centre yesterday.

The Malaysian pair defeated Shomari Wiltshire-Mary Fung-A-Fat of Guyana 11-2, 11-10 in their opening match.

They will meet Welsh combinational Joel Makin-Tesni Evans in the second round.

In the men’s doubles, joint fifth seeds Ng Eain Yow-Ivan Yuen have received a first round bye while Syafiq and Ong Sai Hung will play Canadians Nick Sachvie-David Baillargeon in their opening match.

All four pairs received byes in the first round. 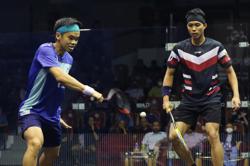