PETALING JAYA: The National Sports Institute (NSI) will make sure that national squash player S. Sivasangari is properly guided before making her return to the sport.

The 23-year-old Kedahan was involved in a car crash in the early hours of Sunday, suffering injuries to her head and spine. She is in stable condition, and it is learnt that she will be discharged in a week. Doctors have given her three months to recover.

“Our team will evaluate her condition based on the notes given by the hospital. We will monitor her situation and from there prepare a rehab programme,” he said.

“We are going to take one step at a time. The rehabilitation has to be followed properly, and we will ensure her return to squash is properly guided and structured.

“After that, the next step will be physical training, which we will monitor. The rehabilitation is part of the three-month recovery mentioned by the Putrajaya Hospital doctors.

“Whether three months is good enough or not, we will wait and see.”

Faedzal said doctors had given assurances that her injuries were not career-threatening and she has a good chance of making a return.

“Our aim is to aid her return to court but we want to do it correctly. With every resource and information available to us, we will do everything to make her stronger.”Due to the unfortunate incident, Sivasangari is out of the Commonwealth Games in Birmingham next month, where she was appointed as the flag-bearer alongside para athlete Bonnie Bunyau Gustin.

He said this matter would be finalised at the Olympic Council of Malaysia board meeting, which will be held before the July 15 deadline for naming the replacement. 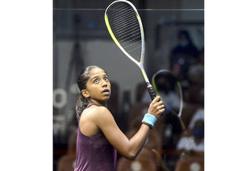