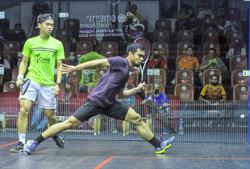 PETALING JAYA: It was a match to forget but S. Sivasangari said she will be rich with experience following her defeat to Nour El Tayeb in the last 16 of the World Championships.

Buoyed by her current form, the world No. 20 was hoping for a major breakthrough in Cairo but the Egyptian, a former world No 3, proved she is still a force to be reckoned with despite only returning to competition five months ago after giving birth to a baby girl.

The 29-year-old El Tayeb’s vast experience was the deciding factor as the ‘Black Widow’ weaved her web around Sivasangari and never let her opponent settle into the game on Wednesday.

“I am disappointed and frustrated with my performance.

“I didn’t feel I gave my best on court. I fell flat, it’s not the game I wanted to play,” lamented Sivasangari.

“But I am grateful for the experience. Next is to focus on the El Gouna (International).”

Head coach Ajaz Azmat believes that Sivasangari, while showing marked improvement, still comes up short when it comes to handling pressure against the top players and the ability to win big points.

However, the Pakistani also concurred with Sivasangari that the experience gained will do her a world of good to become better.

From Cairo, Sivasangari will head to the beach town near Hurghada, Egypt for the El Gouna International (May 27-June 3).

It will be another Egyptian confrontation for the the 23-year-old Malaysian as she will take on Yathreb Adel.

Sivasangari should overcome the world No. 38 before running into another Egyptian hurdle, seventh seed and world No. 7 Salma Hany, in the second round.

Having faced mostly Egyptians in her last few tournaments and with the experience gained by playing El Tayeb, she has a fighting chance against Salma.

Rachel Arnold, Aifa Azman, Ng Eain Yow and Ivan Yuen, who crashed out in the first round in Cairo, are also involved in the El Gouna tournament.

Rachel plays Egypt’s Zeina Mickawy in the first round while Aifa is up against another Egyptian, Jana Shiha.

World No. 22 Eain Yow also plays against Egypt’s Zahed Salem while Ivan takes on the experienced Patrick Rooney of England in his opening match.