In control: Ng Eain Yow (front) returning a shot to India’s Saurav Ghosal during the men’s final at the Asian Team Squash Championships in Bukit Jalil.

PETALING JAYA: The Malaysian men and women’s teams made it a glorious double after turning the tables on their top seeded rivals in the Asian Team Squash Championships finals at Bukit Jalil.

For the record, Malaysia have not won the double at the Asian team meet since 2008.

However, Aifa did not give her opponent Ho Tze Lok a chance to step into the game as she brushed aside her rival 11-4, 11-3, 11-6 in just 21 minutes to seal victory for Malaysia.

The men’s team were not to be outdone either as they conquered fancied India 2-1 in the evening.

National No. 1 Ng Eain Yow got the ball rolling by beating the newly crowned Malaysian Open champion and world No. 15 Saurav Ghosal 12-10, 11-4, 11-8 for the first point.

Squash Racquets Association of Malaysia president Gerard Monteiro was overjoyed with the success of the men’s and women’s teams.

“We had been hoping Malaysia would be able to lift both the men’s and women’s team titles in our own backyard. It has been a great two weeks of squash action and we didn’t even think this would happen at the beginning of the year.

“Now we hope our players will be able to continue the momentum when they play in the Asian Individual Squash Championships in Pakistan later this month. 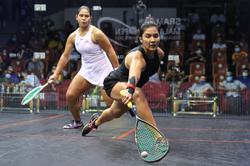 SRAM to meet state bodies over funding issues related to dropped players
Rachel fancies chance of reaching at least third round in Cleveland
NSC: We have not closed door on Wee Wern
Wee Wern turns down SRAM offer, will seek own funding
NSC make it clear that Wee Wern not left out in the cold
Aifa ready to travel abroad on her own to gain experience
Sivasangari remains positive despite failing to hit top 25 target
Wee Wern down but not out for long after shock exclusion
Former No. 1 Wee Wern axed from Podium Programme
Squash turns up as the saving grace for Malaysian sport