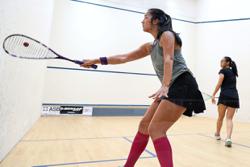 PETALING JAYA: National No. 1 Ng Eain Yow will be out to go the distance against current world No. 1 Ali Farag of Egypt in the second round of the World Squash Championships in Chicago today.

Eain Yow, ranked 26th in the world and based in England, however has his work cut out against the Egyptian, who needs to lift the title to defend his world No. 1 status.

Eain Yow has not ventured beyond the first round in four previous outings as he always had to face higher ranked opponents and is unlikely he will break the jinx.

S. Sivasangari is through to the second round of the women’s competition after beating Egyptian Sana Ibrahim 11-9, 11-2, 11-8.

Sivasangari faces 13th seed Nele Gilis of Belgium for a place in the last 16 today.