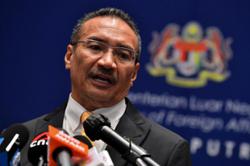 PETALING JAYA: Time is running out on national No. 1 squash player Low Wee Wern (pic) to compete in the El Gouna International Squash in Cairo, Egypt, from May 20-28.

She has applied for travel approval but the relevant Malaysian government department has yet to respond.

The organisers in Egypt need all the travel details by May 10 so that it will give them enough time to welcome all the participants into the tournament bubble.

The 30-year-old Wee Wern is keeping her fingers crossed to travel to Egypt to compete in her first international tournament in more than a year.

“I’ve done all my part as far as the documents are concerned, but if I don’t get the approval soon, I will have to withdraw from the tournament. It’ll be a waste, ” said Wee Wern.

The world No. 24 is not the only Malaysian heading to Egypt and facing a similar struggle.

Squash Racquets Association of Malaysia (SRAM) have also named reigning SRAM-PSA 1 men and singles champions Ivan Yuen, Aifa Azman respectively and Rachel Arnold for the meet but so far, only Aifa and Rachel have received the nod to cross the international border.

They will be joined by S. Sivasangari from the United States and Ng Eain Yow will travel from England.

Wee Wern says overcoming the Covid-19 pandemic was already a great challenge for professional athletes but handling paperwork for travel was also taxing.

“This is not the first time that I’ve applied for an approval. I know all this takes time, so I have submitted everything early, ” said Wee Wern.

“This application for the Egypt trip was initially rejected as they said that I did not have a letter from NSC (National Sports Council). My trip to Manchester was approved without the NSC letter last month.

“Anyway, I’ve reapplied. It will take five working days but it has been more than that now.”

“Only with this approval, I will then be able to book my flight and take the PCR test. As a player, we have to do all our own bookings for hotels and flights.

“I’m running out of time really, ” said Wee Wern, who has done her part to take a second vaccine shot.

All that Wee Wern hopes to achieve in Egypt is to get some competitive games.

“It’s a platinum event, so almost everyone in the top 20 in the world will be playing, ” said Wee Wern.

“My goal now is to actually get there first, but jokes aside, it will be good to get back out there in a competitive environment again to be honest, ” she added.