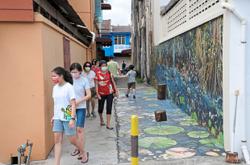 PETALING JAYA: It’s a timely title to savour for Aifa Azman (pic) as she ushers in the month of Ramadan with her first victory this year.

The 20-year-old Aifa is slowly proving herself to be the next star of Malaysian squash after she won the SRAM PSA 1, her first 10K professional tournament title.

The lass from Alor Setar, Kedah, was indeed in her element in the women’s final when she beat Ooi Kah Yan in straight sets 11-9,11-5 and 11-8 at the National Squash Centre in Bukit Jalil yesterday.

The first set yesterday was neck-and-neck, but Aifa controlled the last two sets, as she showed great composure and awareness to beat world No. 77 Kah Yan.

Aifa, who has won seven 5K professional tournaments before this, was elated to pocket her biggest prize money of US$10,000 (RM41,360). “Not a bad way to usher in the Ramadan at all, ” chirped Aifa, who is ranked 64th in the world.

“For more than a year, I have trained for this tournament, and it obviously feels good to have finally won it.

“This is my first tournament since the Covid-19 pandemic broke out last year.

“During the final, I didn’t focus on my opponent and just concentrated on my game.

“This is the start I had hoped for before going for other tournaments.”

When asked if it was time for people to take note of the juniors, Aifa said, it was still a long way to go.

“All of us are coming back after a year, and for the seniors, the pressure is much, much higher, whereas the juniors have nothing to lose. It was quite tough on Rachel and Wee Wern, ” she said.

“It’s good that the juniors are putting the pressure on them, but we have a long way to go. We will work hard to get better.”

When asked what’s her next competition, she jokingly said: “It’s the fasting month.”

“For now, my coach Andrew (Cross) has suggested for me to maintain my form in the 10Ks, so it’s training first and we will plan accordingly.

“I would love to dedicate this win to my loved ones in Alor Setar, my friends, and coach.”

This is the sixth meeting between both of them, and Ivan to date has not lost to the Kelantan player.

Wee Wern waits anxiously for govt travel permit to Egypt
SportExcel the launching pad to stardom for Nicol
Wee Wern looks forward to better results on court after ICL surgery
Watch your back, Ivan
Kah Yan, Aifa stun favourites to enter squash final
Wee Wern and Rachel storm into semi-finals
Ivan gets the ball rolling as seeded players make winning starts
Tweaked pro squash tourney gets underway after more than a year
Squash’s Azman sisters can’t wait to get back into action after long layoff
Wee Wern finally gets to play in pro tourney after more than a year