Aifa has sister to contend with at the first hurdle 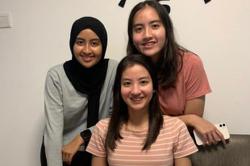 PETALING JAYA: Aifa Azman (pic) is ready to pick up where she left off.

The squash player, who is touted as a future star, has fully recovered from her knee injuries and is ready to continue her fine form at the National Championships today.

The 17-year-old is aiming for a semi-final clash against defending champion S. Sivasangari at the National Squash Centre in Bukit Jalil.

But first she has to get past her older sister Aika in the first round before a likely quarter-final match against Rachel Arnold.

“It’s just too bad that I have to cross paths with my sister. It’s been a long time since I played against her.

“I know her game well and I’m confident of winning.

“Against Rachel, it’s important that I win as it will give me more confidence.

“It will also be a good sign that I’m getting back my form.”

Aifa has been impressive in the last few years. She played a key role with Datuk Nicol David, Low Wee Wern and S. Sivasangari in winning the Asian Games bronze medal in Indonesia last year.

She also competed at the Women’s World Team Championships later that year where Malaysia lost in the quarter-finals.

Now back to full fitness, Aifa is optimistic about a good showing.

“I’m free from any injuries now and since the Asian Juniors I’ve made quite a bit of progress. My fitness has also improved.

“There’re a lot of things that I learned in the loss to Yiwen.

“I’ve been working on it and doing everything I can to make an impact at the nationals.” 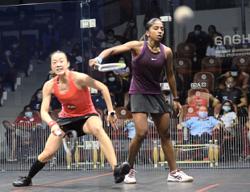