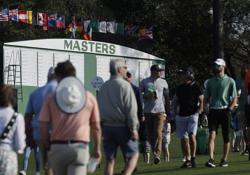 THE fact that Tiger Woods chose to make his comeback at the Masters after almost losing his leg due to a car accident tells us two things.

One, it’s about one man’s undying love for the game and two, it speaks volume of the reverence the world of golf has for the prestigious tournament.

Few competitions are as synonymous with a sport as the annual trip to the nearly 100-year-old Augusta National Golf Club.

All eyes were fixed on one familiar face this week after the five-time Masters champion indicated in a press conference on Tuesday that he planned on taking part this year.

The annual tournament has been a focal point for his career as Woods was not even a year into his first PGA Tour season when he won the Masters in 1997 at the age of 21.

He set a record in the competition by ending the game with a 12-stroke advantage – still the biggest margin of victory in the history of Augusta.

Then it took him more than 10 years to get his fifth Green Jacket, winning at Augusta in 2019 at age 43.

Many had presumed it was only a matter of time before he would surpass legendary golfer Jack Nicklaus’ record of 18 Major championship wins.

But multiple injuries, personal issues and four back surgeries culminated in an almost 11-year title drought for Woods.

Many thought he would never play competitively again and it remained to be seen if Woods can out-do his previous amazing comeback win this time.

But the venue certainly provided the fitting backdrop to Woods’ return.

The year’s first Major featured all of golf’s bests but Woods, currently ranked 973rd in the world, was the man most of them had come to see.

And the 15-time Major champion did not disappoint the thousands who thronged the venue on day one. He produced a remarkable performance to open with a one-under 71.

An immense crowd followed Woods’ exploits through 18 holes despite the Augusta course in Georgia having one of the strictest rules in place.

A glance at the rules for 2022 can make a casual outsider to golf cringe.

No asking for autographs, no mobile phones, no cameras and no form of advertising is allowed.

“The place was electric. I hadn’t played like this since 2019 when I won because in 2020 we had Covid-19 and we had no one here, and I didn’t play last year,” said Woods in his post-match press conference.

“To have the patrons fully out and to have that type of energy out there was awesome to feel.”

At 46, Woods is still lighting up the golf world and thousands of new fans, including from Malaysia, will surely be born overnight.

Can he pull off his magic in Augusta again by winning his sixth?

We shall see on Sunday.

Let the professionals decide – for themselves and the nation
Sourcing for own funds seems to be the highest tower for Wai Ching to scale
Faizal – the common man’s minister with a huge battle on his hands
Old methods, old faces, when will Malaysian sports move forward?
Only the best will do for sports, but will the minister start the ball rolling?
A need for more quality in top sports, not just quantity in medals
Time to pick up the pieces before the Chengdu challenge
Azizul determined to bounce back to fulfil his dream despite risks
Can our youngsters keep the tradition going in men’s 100m?
Time to light up SEA Games arena after two years of darkness