Carnival air abounds, but don’t turn it into a fun-fair

LIVING in a country where there are almost no major natural disasters, I must say I had no idea of what to expect when the news came that Typhoon Tisoy was going to hit the Philippines – just as my mates and I are there to cover the SEA Games.

How bad would it be? How am I supposed to prepare for it? My fears rose and images of those hurricanes and disasters in the documentaries on TV were running in my mind.

Tisoy, also known internationally as Kammuri, is said to be the strongest storm to hit the Philippines this year. After just two days, local media reported that it had claimed nine lives across the country and caused 811mil pesos (RM66.53mil) in damage.

But me and my mates in Metro Manila knew little about that.

I woke up on Tuesday morning to a gloomy sky covered with dark clouds. It was raining cats and dogs, with strong winds whistling and howling outside our apartment.

It lasted for just over a day, then weakened and went away. It was little bit more terrifying than the monsoon winds we get back home ever year.

Most Games events, especially the indoor ones, went on as scheduled and we, the journalists, carried on with our daily coverage.

All those fears I had had were for nothing. Instead, my first trip to Manila has been pleasant except, of course, for the travelling.

I was at the Asian Games in Jakarta and thought I had seen the mother of all traffic jams. Boy, was I wrong!

But there are good sides, too. The food is good and the Filipino girls better. They are attractive and always smiling.

Filipinos are indeed very friendly people. They never fail to greet you and even take the initiative to strike up conversations.

Many locals actually thought I was an athlete when they spotted my accreditation tag. They asked questions like “what sport are you competing in?” and “did you win or lose today?”.

That left me flattered. I don’t think I have an athlete’s body.

And then, there was once when I felt like a celebrity. I was having lunch in a shopping mall with a fellow journalist when a restaurant staff asked to have a selfie taken with us.

Another group of young people, I presume they were students, were looking at us too.

It wasn’t too long before one of them came over asking for a wefie and whether we were athletes. We said we were journalists and the girl said: “Ah, I’m sorry, ” and walked away. No wefie.

Overall, though, everyone seems to be having fun. And there’s a carnival air about – in more ways than one.

The local media are happy with their contingent’s haul and are confident of claiming a whopping 220 gold medals.

That’s certainly mind-blowing considering that they could just manage 24 in Kuala Lumpur.

Philippines took just two days to surpass that figure now top the medal tally with more than 60 golds with arnis (14) and dancesport (10) contributing the bulk.

It’s the way of the Games, the host nation decide the sports and number of events contested.

Of course, there are those who introduced obscure sports – if they can even be called sports in the first place – but there must be a limit. Otherwise, it will turn into a community sports carnival.

As for our national contingent, I wish them all the best in meeting their 70-gold target. Going by how they have fared so far, I am sceptical but the National Sports Council (NSC) must have done their number-crunching. We’ll wait and see. 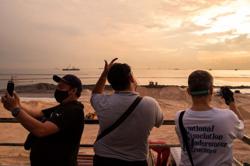 Most cases in Metro Manila