LONDON (Reuters) - Suspended South Africa Director of Rugby Rassie Erasmus has met with top World Rugby officials to discuss his ongoing criticism of referees that has seen him twice suspended in the last year, SA Rugby said on Saturday.

The meeting with World Rugby chief executive officer Alan Gilpin and World Rugby Director of Rugby Phil Davies was held on Thursday and described as a “positive discussion regarding recent events and match official communications in general”.

“Views were exchanged resulting in a better understanding of the respective positions,” SA Rugby said in a statement.

“There was agreement that further dialogue was needed in terms of enhancing the process that operates between teams and match officials to ensure all can play their part in creating great spectacles and avoid frustration but in a way that underpins the respect for match officials, coaches and players,” it added.

Erasmus was banned by World Rugby for two matches earlier this month after sarcastic social media posts that criticised experienced English referee Wayne Barnes’ performance when the Springboks suffered a narrow 30-26 loss to France on Nov. 12.

It meant he was unable to attend South Africa’s test victory in Italy last week or Saturday’s match at Twickenham against England.

He had only just returned from a 12-month matchday suspension for an hour-long video he made during last year’s British & Irish Lions tour in which forensically tore apart the refereeing of Australia’s Nic Berry in the Boks’ first test defeat.

(Writing by Mark Gleeson in Doha; Editing by Hugh Lawson) 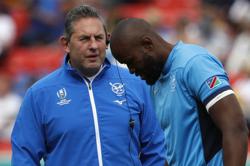