(Reuters) - Australia coach Dave Rennie confirmed Taniela Tupou has ruptured an Achilles tendon but said the key prop could yet play a part in next year's World Cup in France.

The tighthead was sent home with a raft of other injured Wallabies this week after breaking down in the defeat to Ireland last Saturday.

"Recovery time (is) seven-plus months, so he's unlikely to get back in time for Super (Rugby) but will be back in time for international," Rennie told reporters in Cardiff ahead of the Wallabies' season-ending test against Wales.

Rugby Australia boss Andy Marinos said the rash of ruptured Achilles was "alarming" and pledged a comprehensive review into the Wallabies' injury crisis at season's end.

Rennie was left with only 25 fit players to select for the Wales clash out of his original tour squad of 36.

That has left him with a raw match-day side to play Wales, with flyhalf Ben Donaldson wearing the number 10 jersey in his second test and another six players with less than 10 caps in the starting 15.

"Obviously it's disappointing," Rennie said of the injuries.

"With the amount of injuries we have, we'll have a good look into what's caused some of those.

"Some are bad luck and others if it's something we're doing within our programme then we need to adjust." 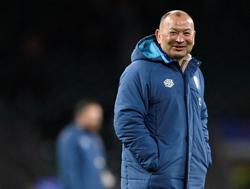